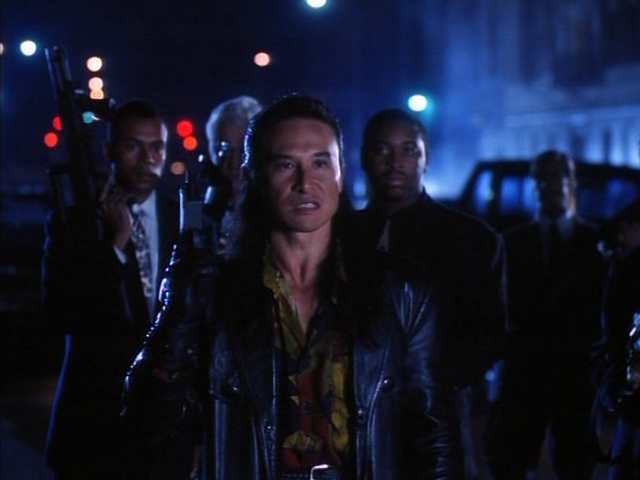 Private Wars is very 90’s and a bit cheesy but it’s still a lot of fun and if you can find it then check it out.

Plot: A wealthy businessman is trying to “convince” the inhabitants of an old neighborhood to abandon their homes in order to build a huge business center there. To achieve his goals, he bribes the police and uses organized bands to intimidate the neighbors. But perhaps this alcoholic ex-cop, Manning, could help them, but how?

Review: I finally managed to track down a copy of this movie on DVD and I have to say that it was a lot of fun; sure the story was derivative and there are a million other movies with similar plots, but this had some good action scenes and a nice amount of humour as well. Let me just say this: It has a midget. With an Uzi.

If that doesn’t sell you on it then I don’t know what will; sadly we never see him use said weapon but it’s still awesome anyway.

Steve Railsback is the alcoholic ex-cop Jack Manning brought in by his old buddy to save his Hood from a greedy developer and the street gangs he’s hired to terrify the locals. He’s a likable lead and I love how despite Jack’s drinking problem, he’s still pretty badass and can take on five guys with ease.

There aren’t too many familiar faces in the supporting cast except Michael Champion who you’ll recognize from Total Recall. He’s the corrupt police chief whose story arc doesn’t quite go the way you’d expect which was a pleasant twist.

The acting and script are alright too with Railsback owning every scene he is in.

The story has just the right amount of humour without it ever being too much and there isn’t any annoying comic relief sidekick either.

There is a bit of a pacing lag in the mid-section and I’d have liked to see Jack beat more people up but his prison fight was cool, despite how unrealistic it was that the two guys he beat up, he became friends with.

The villain was a great bastard and you were counting down until he got his comeuppance…. which was rather satisfying.

The last 15 minutes has some hugely entertaining, well put together action and despite the film’s low budget it manages to impress with real stunts and some nice ‘splosions.

Overall, Private Wars is very 90’s and a bit cheesy but it’s still a lot of fun and if you can find it then check it out.