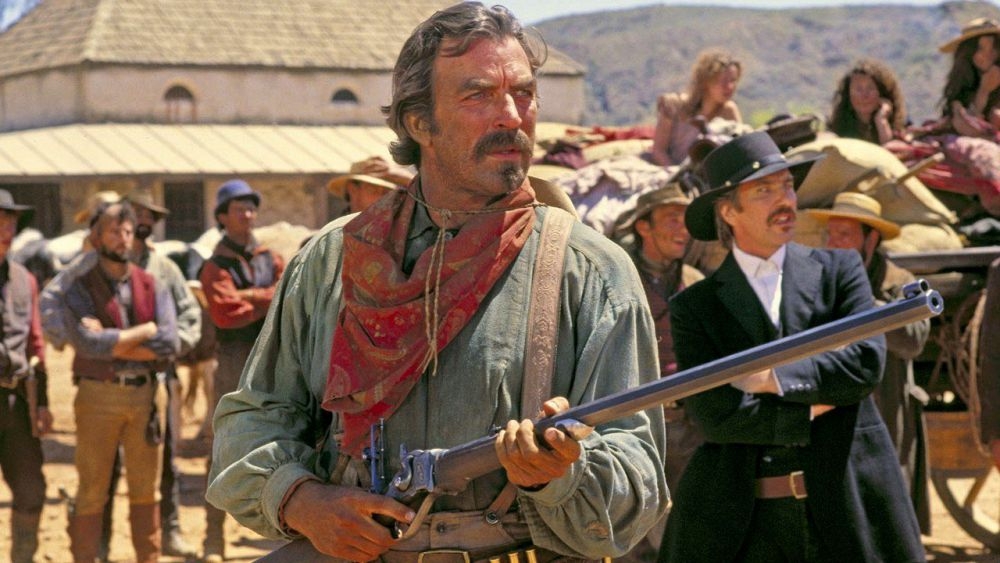 I only watched Quigley Down Under for the first time recently; for some reason it never really appealed mostly because I always hated the title but I figured this October the movie turns 30 so I would give it a viewing.

Quigley Down Under is a rather odd film and I’d be lying if I said I thought it was great; it starts off rather lighthearted introducing us to our hero Quigley (Tom Selleck) who is chivalrous and immediately appealing. Within a few minutes he is defending the honour of a woman called Crazy Cora (Laura San Giacomo) who is being attacked by three men and we find out he is not someone to trifle with as he can handle himself rather well.

Quigley has travelled to the Australian outback to answer a help wanted ad calling for a sharpshooter. When Quigley meets his employer, Elliot Marston (Alan Rickman), he’s appalled to discover the job involves killing Aborigines. The two men fight, and when Quigley is knocked out, Marston leaves him and Cora to die in a remote part of the outback. They’re rescued, however, by Aborigines, and plot their revenge.

It doesn’t take long for the tone of the movie to shift from lighthearted to rather dark telling the true story of how the aborigines were treated by the white man. One shocking scene has them being thrown mercilessly off cliffs to their deaths which was the darkest moment of the film.

The performances are excellent with Alan Rickman of course stealing every scene essentially playing the same character he would in Robin Hood: Prince of Thieves (which came after). He doesn’t have all that much to do though and is a bit one note but he is as magnetic as always.

There isn’t much in the way of memorable dialogue but there are a few funny lines but the tone is generally more serious than you’d expect at first.

Tom Selleck plays Quigley perfectly making him slightly world weary but still with enough integrity to stand up for what’s right. Laura San Giacomo is wonderful as Cora and you can tell early on that she has been through some tragedy which is why she always calls Quigley Roy. The scene where she explains what happened is one of the best of the movie.

Keep your eyes open for a very young Ben Mendelsohn who plays one of Marston’s goons.

I thought the pacing was a little off and certain scenes just seemed to go on for too long making the film feel longer than it actually was. I love a slowburn Western as much as the next guy but this didn’t really work for me. I can understand why it wasn’t a huge box office hit at the time as it isn’t a particularly commercial story and not a film I plan on watching again.

Overall, Quigley Down Under has become a cult favourite over the years but aside from Alan Rickman’s villainous turn and excellent performances from the cast I found it a little dull with a tone that’s a bit over the place and a rather forgettable script. Too bad as I liked the characters and I would have enjoyed seeing Quigley again in further adventures.