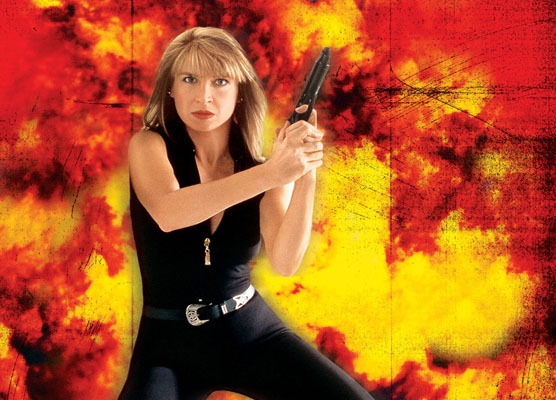 Rage and Honor is hugely entertaining with likeable leads, a strong villain and plenty of martial arts action.

Plot: Witnessing a drug deal involving local gang members and cops, an Australian police officer feels he can no longer be just an observer. He joins forces with a local teacher who just happens to be a karate expert and together they try to take back the streets.

What I liked about it were the characters; they were rather quirky and a little surreal in places; Hannah the Hun who keeps speaking about herself in the third person and Baby who is a slightly crazy junkie who used to be a stockbroker. He is a tragic character and it’s a shame we didn’t get more of a redemption tale for him as the actor who played him (Stephen Davies) really did a fantastic job. Admittedly Hanna’s third person speak got old rather fast but the character was interesting nonetheless.

Cynthia Rothrock is as gorgeous and likeable as always but is still tough as nails with some stunning fight moves. Richard Norton should have become a bigger star as he was a great action hero who also had some good moves. Norton was an eighth-dan in Zen Do Kai and started off his career as a bodyguard. He and Rothrock work well together on screen and have  good chemistry too.

Brian Thompson is on villain duties and he’s always fun to watch but I liked the twist that he is actually Rothrock’s brother in the movie, giving the story a bit more depth than you’d maybe expect. It’s not exactly MacBeth but you know what I mean. A special mention must be made for his epic mullet too which practically steals the movie.

It just feels a little different and I like that director  Terence H. Winkless wasn’t afraid to be a little out there with the characters and story.

There wasn’t really anything memorable about the score but it didn’t need to be; job done.

There’s plenty of excellent fight scenes and it moves long quickly, although it’s not without flaws. When Cynthia gets thrown off the building at the end by Brian Thompson, she’d be dead. Very dead; it stretched credibility even by my low standards.

Overall, Rage and Honor is hugely entertaining with likeable leads, a strong villain and plenty of martial arts action.