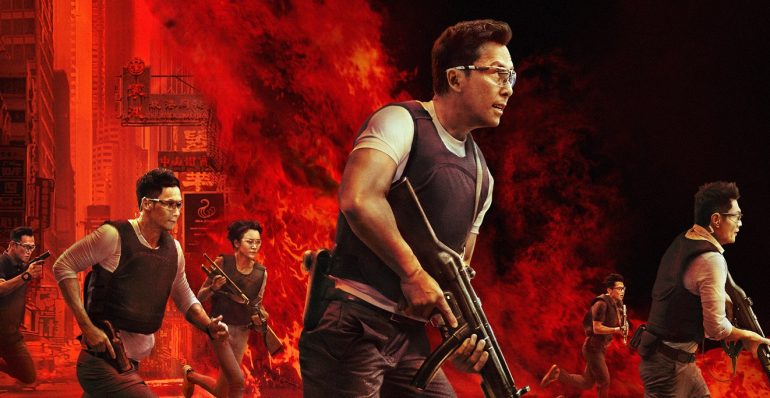 Raging Fire is one of the year’s best action pictures and a real return to form for Donnie Yen; we get characters we care about as well as spectacular action scenes and an engaging story making this a must-see for action fans.

Plot: Bong (Donnie Yen) is a highly respected hardline cop with a long history of success on dangerous cases. However, his past unexpectedly comes back to haunt him when a sting operation is attacked by a mysterious group of criminals led by Ngo (Nicholas Tse). I’ve removed the rest of the synopsis as it gives away a lot of plot points and I don’t want any spoilers here.

Review: Raging Fire has been one of my most anticipated action pictures of the year and I’m pleased to say that it didn’t disappoint. Donnie Yen is still the real deal and remains one of the best action stars in the business but it is also a fitting epitaph for the late director Benny Chan who sadly passed away of cancer last year.

This reminded me a little of Heat especially with the climactic shootout in the street but we also have a protagonist and antagonist on opposite sides of the law and the scenes when they are speaking together are filled with tension. I won’t go into the background of their relationship and spoil anything but Nicholas Tse may be the best villain of the year (so far) as Ngo and you can understand his motivations for doing what he does but there is no going back after all the crimes he has committed.

The performances are all strong with Yen and Tse on top form which adds to the tragedy of the story so we are actually emotionally engaged and not just waiting for the next fight scene.

Raging Fire isn’t wall-to-wall action but it happens when it’s required and is a part of the story; we don’t just get action for the sake of it. This means the movie may not be quite the adrenaline rush the trailers made it out to be and the story is nothing we haven’t seen before but it’s still well paced and the set-pieces are spectacular. We get chases, shoot-outs and the climactic fight scene is incredibly satisfying and brutal.

There is the odd little piece of CG but for the most part the action looks fantastic and you get a nice behind the scenes look at how it was put together in the moving tribute to director Chan over the end credits.

The score adds to the excitement with some awesome percussion and it works well during the action sequences.

Overall, Raging Fire is one of the year’s best action movies after several disappointments so it’s nice to see Donnie Yen back on form proving he is still one of the best in the business at what he does.