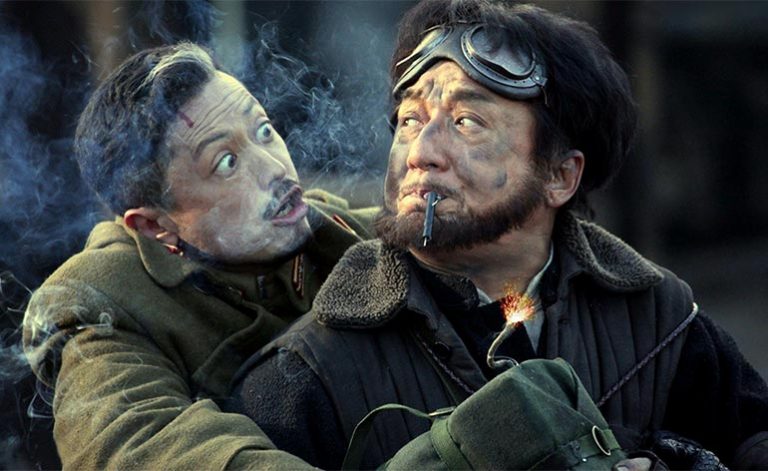 Railroad Tigers is certainly better than Jackie Chan’s past few movies and it has its moments but it’s got far too much silly humour so you can’t take the plot seriously; it’s also far longer than it needs to be and not something I’d want to watch again.

Plot: A railroad worker (Jackie Chan) and his ragtag group of freedom fighters find themselves on the wrong side of the tracks when they decide to ambush a heavily armed military train filled with desperately needed provisions. Unarmed and outnumbered, they must rely on their wits to battle an entire army.

Review: I saw Railroad Tigers on Netflix the other day and figured I’d give it a shot; it hadn’t been a movie I was in a mad rush to watch mostly due to the fact that Jackie Chan’s recent output has been pretty poor (See Skiptrace and Kung-fu Yoga). Railroad Tigers is certainly a step up from those two movies but it still isn’t particularly great.

For one thing, it’s just too damn long, as with so many movies today it doesn’t know when to end. It also has far too much of the trademark Chan slapstick humour that I hate so much. I like the odd joke in a movie but whenever it makes the story into a live action cartoon it really takes away and real sense of danger or threat. Literally every scene has some stupid shit happening which took me out of it completely.

I also didn’t think the story was all that interesting to keep me invested for over 2 hours. I get it, you want to blow up the bridge to try and defeat the Japanese… *Two hours later*…  OK so maybe NOW you’ll blow up the bridge…. No? Just blow the fucking bridge already!! So yeah, it just goes on forever and by the end I had completely tuned out.

The music was so lame that it was distracting too giving us one of the worst scores of the year.

It’s not all bad though; admittedly I laughed a few times and Chan is a lovable hero as always proving when it comes to action he still has the moves. There aren’t really any fight scenes though so it’s something a little different from him. There are still plenty of stunts (and some CG) with a few impressive set-pieces and although it goes on for too long the finale is spectacular.

Overall, Railroad Tigers is certainly better than Jackie Chan’s past few movies and it has its moments but it’s got far too much silly humour so you can’t take the plot seriously; it’s also far longer than it needs to be and not something I’d want to watch again. Thank God, we’ve got The Foreigner this week.