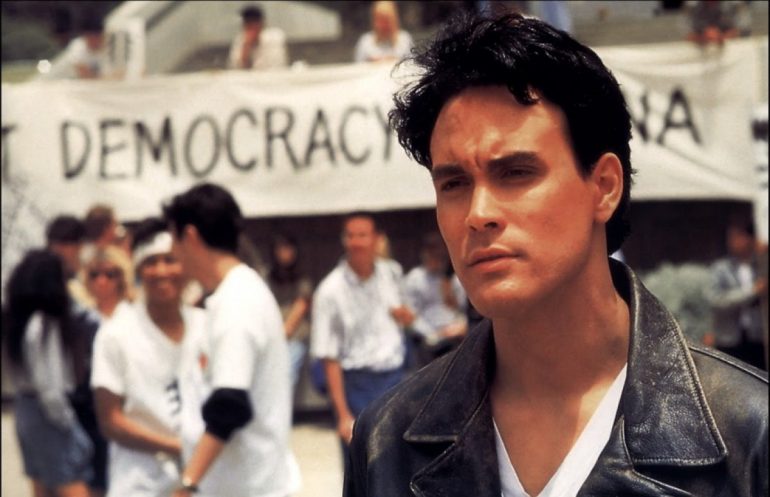 Rapid Fire is hugely entertaining fun with plenty of action, one-liners and characters to be pretty much essential.

Plot: When student Jake Lo witnesses a killing, he finds himself caught between two feuding drug lords. Betrayed and set up by the federal agents protecting him, the only one he can trust is Ryan, a single-minded Chicago cop who reminds Jake of his deceased father. To clear his name, Jake agrees to help Ryan bring down the drug lords.

Review: Rapid Fire is one of my all-time favourite action movies; I’m well aware of its cheesiness but that’s part of why I love it so much. Brandon Lee’s easy likability jumps off the screen and watching him fight is always impressive. I thought his kicks looked great on film and he was just born to be a movie star; it’s still such a shame that he was taken from us so soon as he had such talent.

Rapid Fire, The Crow and Showdown in Little Tokyo are my 3 favourite movies of his and although it’s not that original story-wise Rapid Fire is eminently rewatchable. It moves along at a fast pace, has Powers Boothe on rare form as a good cop and interestingly enough also co-stars Raymond J. Barry who would later work with Boothe again on the JCVD classic Sudden Death.

I like how Jake (Lee) is actually a bit of an ass to start off with and really doesn’t want to get involved with Mace Ryan’s (Boothe) plan to take down a crime syndicate; he’s quite selfish and is filled with self-pity after his father’s tragic death.

Nick Mancuso nearly steals the movie as the slimy villain Antonio Serrano; a racist scumbag who you just love to hate. What’s interesting is that he isn’t actually the main villain, which was a relatively unexpected turn….

You know that Kinman Tau (Tzi Ma) is going to have a big part in the story and he turns out to be the real villain. *Spoiler alert* For the record, he also dies one of the best bad guy deaths ever: he gets electrocuted then hit by a train… no sequel for you.

As if that isn’t awesome enough, Al Leong shows up as a silent (as always) henchman who has a great final fight scene with Brandon Lee.

The music is the weakest thing about the movie; the saxophone is rather intrusive and the ballad which comes on suddenly before a love scene causes plenty of unintentional humour too but to be honest it all just adds to the enjoyment.

There is an action scene every 2 minutes and it’s hard to decide what the best is; Jake fighting the corrupt cops in a small apartment is definitely a highlight but I think the street shoot-out/bar fight is also impressive.

Overall, Rapid Fire is hugely entertaining fun with plenty of action, one-liners and characters to be pretty much essential. Brandon Lee, you are sorely missed.