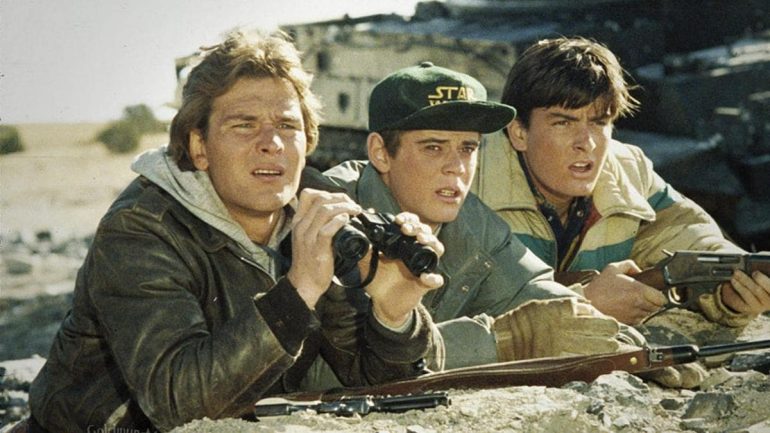 Believe it or not I saw the remake of Red Dawn starring Chris Hemsworth before the original with Patrick Swayze. When the remake came out everyone of course hated it for the simple fact it existed but I remember enjoying it as I wasn’t comparing it to anything so I thought over the past weekend I would rewatch both films and decide which is the better film.

Plot: In an alternate 1980s, the United States stands alone as communism grows stronger. When Soviet soldiers invade a small Colorado town, brothers Jed (Patrick Swayze) and Matt Eckert (Charlie Sheen) escape with friends to the forest. With their father, Tom (Harry Dean Stanton), a prisoner of the invading army, the children decide to fight against the Soviets. As the country comes under increasing attack, the group teams up with Lt. Col. Andrew Tanner (Powers Boothe) to take back their town.

I forgot just how grim the original Red Dawn is and it really leaves you with nothing by the end but it’s still a cracking action picture that is never predictable and isn’t afraid to challenge the viewer.

With an incredible cast that includes Patrick Swayze, Charlie Sheen, Powers Boothe, Harry Dean Stanton, C. Thomas Howell, Lea Thompson and Jennifer Grey Red Dawn is one of the lesser appreciated action pictures of the 80s, but it manages to avoid gung ho heroics for a more somber tone. The film has little in the way of levity and that feels right for the type of story they are telling.

It wastes no time getting going with an everyday picture of America with Swayze’s Jed and his young brother Matt (Charlie Sheen) joking with each other about a football game; we cut to a class taught by Mr. Teasdale (the late great Frank McCrae), and they are interrupted when they see parachutes coming down from the sky. Teasdale goes to investigate and is immediately gunned down and the invasion begins.

Jed, Matt and a group of kids manage to escape into the mountains and begin to fight back against the oppressors.

There are few one-liners and as the battle continues over months our group of heroes calling themselves “The Wolverines” start using tactics that might make them no better than the invaders.

The action scenes are nothing short of spectacular with regular shoot-outs and explosions; there’s a desperation to it as our squad plan guerilla attacks on the invaders and try to restore freedom to their homeland.

William Smith shines as one of the main villains Strelnikov but one of the most interesting characters is Ron O’Neal’s Bella who just wants to go home to his family.

Despite the lack of humour there are still some iconic lines of dialogue like “Avenge Me!” and “Wolverines!” which make the film still stand out.

Swayze was never bad in anything and he is fantastic as Jed who is quite a complicated character that has to make difficult decisions that the rest of the crew may not like.

It could be argued that the pacing lags occasionally but I loved the scenes where it shows how many months have past and that this is a battle that has gone on for some time. The kids look visibly exhausted by the war and takes its toll on everyone.

(SPOILER ALERT) Like I said above, Red Dawn has a rather downbeat ending after Swayze and Sheen are both killed so it’s not exactly feelgood fare but it does have a sense of optimism that their sacrifice wasn’t for nothing.

Overall, Red Dawn still holds up as an awesome action picture with memorable characters, spectacular set-pieces and a serious tone. AVENGE ME! 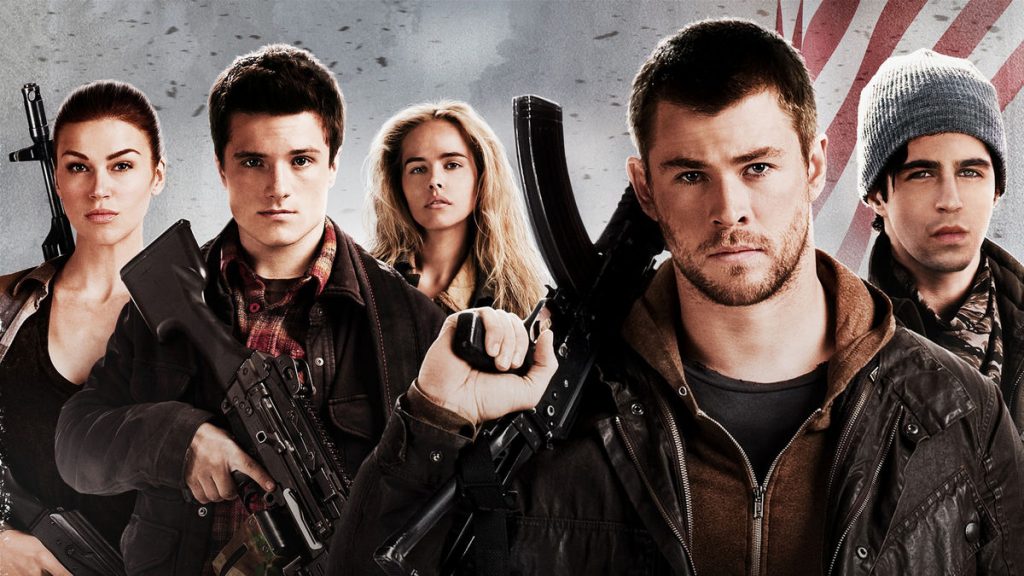 Plot: When North Korean troops invade U.S. soil and take over the city of Spokane, Wash., a recently returned Iraq War veteran (Chris Hemsworth) and a group of teens (Josh Peck, Josh Hutcherson) flee to the woods and form a band of freedom fighters. Dubbing themselves the Wolverines, the youths launch guerrilla attacks against the invaders — but how long they can sustain the fight in the face of the enemy’s superior numbers and firepower remains in question.

When the inevitable remake no one asked for was announced there were collective groans from fans of the original but I saw it after this so when I went into the remake I actually had a good time. Having watched both movies again its easy to say which is the better picture but I refuse to say this a terrible film.

This time it’s the North Koreans who invade the USA and our primary villain is Captain Cho (Will Yun Lee) who is totally one note with no characterization whatsoever. At least with the original Bella had his doubts about the invasion and missed his family giving him a little depth but Cho is one of the most poorly written antagonists I’ve seen for some time. He has a couple of lines of dialogue but just isn’t present enough to make any real impact which is a shame as Will Yun Lee is a great actor.

It still has some decent action scenes and I like Chris Hemsworth as Jed even if he is no Swayze. We also have the welcome addition of Jeffrey Dean Morgan in the Powers Boothe role, Isabel Lucas as Erica, Josh Hutcherson as Robert Kitner and Adrianne Palicki as Toni Walsh. I thought Matt (Josh Peck) in this movie was more selfish and annoying so I never took to him at all.

This is much shorter than the original so it could be argued it’s better paced but it’s the quieter scenes in the original I like where they are questioning if what they are doing is right.

No one says, “Avenge Me!” in this movie which is stupid as it’s the best line of the original and you’re waiting for it to be said. The PG-13 rating makes the action lack the grit of first film too making it feel more watered down.

(SPOILER) Although Jed still dies in this one at the end I find this has a more upbeat finale truly showing America fighting back against the invaders. This film also has a few more moments of humour but not enough to ruin it.

Overall, the Red Dawn remake may lack the grit (and cast) of the original but it’s still an entertaining and fast paced tale.

I don’t hate the remake of Red Dawn and think it still entertains but I have to go with the original as the cast is better, the action more spectacular and the unpredictable story and grim tone make it stick with you long after watching.