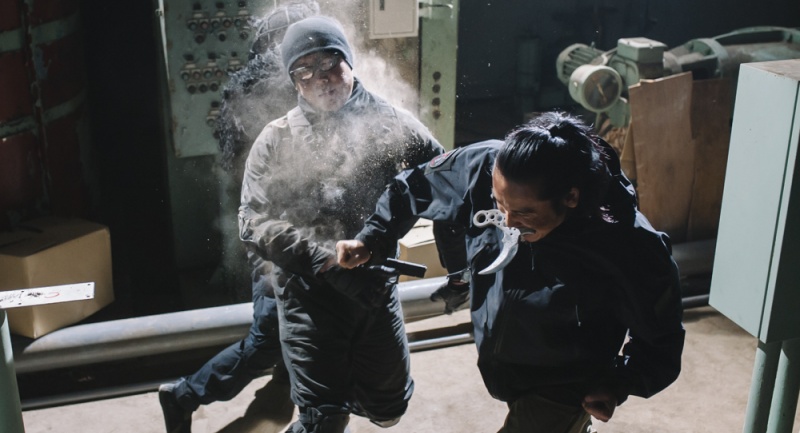 Despite not having much in the way of plot it isn’t required as Re: Born has one purpose and that is to show what a complete badass its star Tak is. Job done as this is one of the best action movies of the year and is set to become a genre classic.

Plot: Toshiro (Tak , formerly Tak Sakaguchi, Versus), a former special forces operative, now lives a quiet life in the Japanese countryside. Despite his seemingly peaceful existence, Toshiro struggles to contain the destructive impulses that once made him the top soldier in an elite unit of killers. When his former commanding officer, the enigmatic Phantom (Akio Ôtsuka), comes out of the shadows seeking revenge, Toshiro goes on a kill-crazy rampage against a squad of ruthless assassins.

Review: I have to give a shout out to my friend Saverio who sent me Re: Born on Blu-ray/DVD as I had been stoked to see it for so long but it hasn’t been released here in Canada yet.

I can safely say that Re: Born is the action movie to beat this year and delivers everything you could want from a fight movie. Using what is known as Zero Range Combat Tak Sakaguchi proves himself one of the most interesting and badass action stars in the business and genre fans are going to lap this up.

The fight scenes in this movie have a genuine ferocity to them and they are never in short supply either. The zero range combat is breathtaking to watch with Toshiro (Tak) taking on any opponent while rarely ever looking at them. He almost looks like he is in a trance while he fights, giving him a deliberately supernatural quality (thus earning his nickname “Ghost”).

The first half starts off rather quietly with a few short sharp bursts of violence but also giving the film its heart and Toshiro his backstory. His relationship with his niece Sachi (Yura Kondo) is what helps Toshiro stay human and he will do whatever it takes to protect her. Sachi is also never annoying which is always a danger when children are involved but she is essential to the plot and genuinely likable.

I especially enjoyed the scenes between Toshiro and his therapist where he essentially says that he needs to kill in order to feel normal; it’s at that point that we know that this is a man who is born to fight and that’s exactly what he does.

Once we get into the final 45 minutes of the film Toshiro goes into full-on one man army mode and kills what must be hundreds of opponents with ruthless efficiency. There are knife fights galore with more throat slashings than a horror movie. There are fountains of blood with the bodycount rising even higher as the runtime continues to its blood-soaked climax.

There isn’t all that much to the plot so no deep thought is required and the script isn’t particularly memorable but it’s really just an excuse for Tak to show how awesome he is at kicking ass and Re: Born demonstrates it perfectly. The forest scenes especially are the action highlight and will be tough to top in any other movie this year.

Any film which has a bad guy called “The Abyss Walker” is immediately worth watching and Toshiro’s final fight with him is satisfyingly brutal and just the right length; they both have exceptional skills and you know you are watching two pros at work.

Overall, Re: Born is (so far) my favourite action movie of the year and will be a tough one to beat; it’s gloriously violent with Tak Sakaguchi proving he is still one of the best action stars in the world.