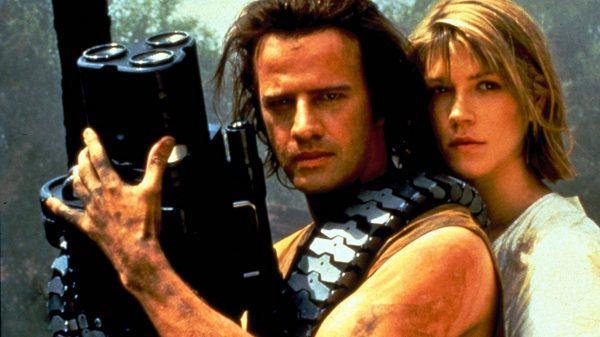 I remember seeing the first Fortress in the theatre with my brother Greg way back in 1992; ah to grow up in the golden age of action cinema was something special. These days a movie like Fortress would go straight to DVD or VOD but we were lucky enough to see it on the big screen. I hadn’t watched it for several years so I thought I’d give it a rewatch along with it’s belated sequel… and here we are.

Fortress stars Christopher Lambert and Loryn Locklin who play outlaw parents of the future that are sent to a high-tech prison as punishment for a second pregnancy. Lambert is John Brennick, a man who really doesn’t like being apart from his wife and unborn child so it doesn’t take him long to hatch a plan and escape from this dystopian nightmare of a prison.

It won’t be easy however, as the Prison Director named Poe (Kurtwood Smith) doesn’t like it when prisoners get ideas above their station so they use brutal forms of mind control which mostly involves shocking their intestines… yup, that’ll do it.

Fortress has a great supporting cast including Clifton Collins Jr., Jeffrey Combs and Vernon Wells and there isn’t a weak performance; yes, some of the effects are a little dated but for the most part it’s still a solidly made and massively entertaining actioner.

At 95 minutes it’s well paced and never goes too long without an action sequence or fight scene; it’s also not for the squeamish with some choice moments of violence. The scene with the magnet taking the explosive device out of Stiggs’ (Tom Towles) stomach still makes me squirm.

Kurtwood Smith’s Prison Director is as creepy as you’d expect but the fact he isn’t entirely human is a nice twist and gives him a different angle from what we’d usually expect from this type of character.

The score is also impressive with full-on orchestra adding to the many action beats.

After all these years Fortress is still a lot of fun and remains one of my favourite Christopher Lambert movies.

This belated sequel which came out in 2000 is actually better than you’d maybe think; it’s nowhere near as good as the original movie but there’s still plenty to enjoy.

After the first movie I always wondered what kind of life John Brennick would lead; would he and his family spend their lives running from the Mentel Corporation? The answer is “yes” but it isn’t long before they catch up with him and put him back in a newer more hi-tech Fortress… this time in spaaaaace.

Every franchise needs to go into space eventually and I thought it was an interesting concept despite the fact that it seems like a pretty easy prison to escape.

Also, the scene where Brennick holds his breath in space as he shoots out the airlock… isn’t that like… physically impossible and he would die? Now I’m no scientist but that seemed like bollocks to me.

The story is practically the same as the first with Brennick trying his best to escape from prison and be reunited with his wife and son. It’s a shame there was another actress playing his wife this time which was kind of jarring but her role was small and inconsequential so it wasn’t a big deal.

Once again, Fortress 2 wastes no time with getting going and there is plenty of action but I thought nothing quite matched the brutal bunch up between Lambert and Vernon Wells in the first movie.

The Prison Director this time is played by Patrick Malahide who isn’t a patch on Kurtwood Smith and is a rather bland and forgettable villain. We also get a small role from Pam Grier too but she is wasted with nothing really to do.

So, Fortress 2: Re-Entry is a fun ride and better than you’d maybe expect but it’s not as good as the first.