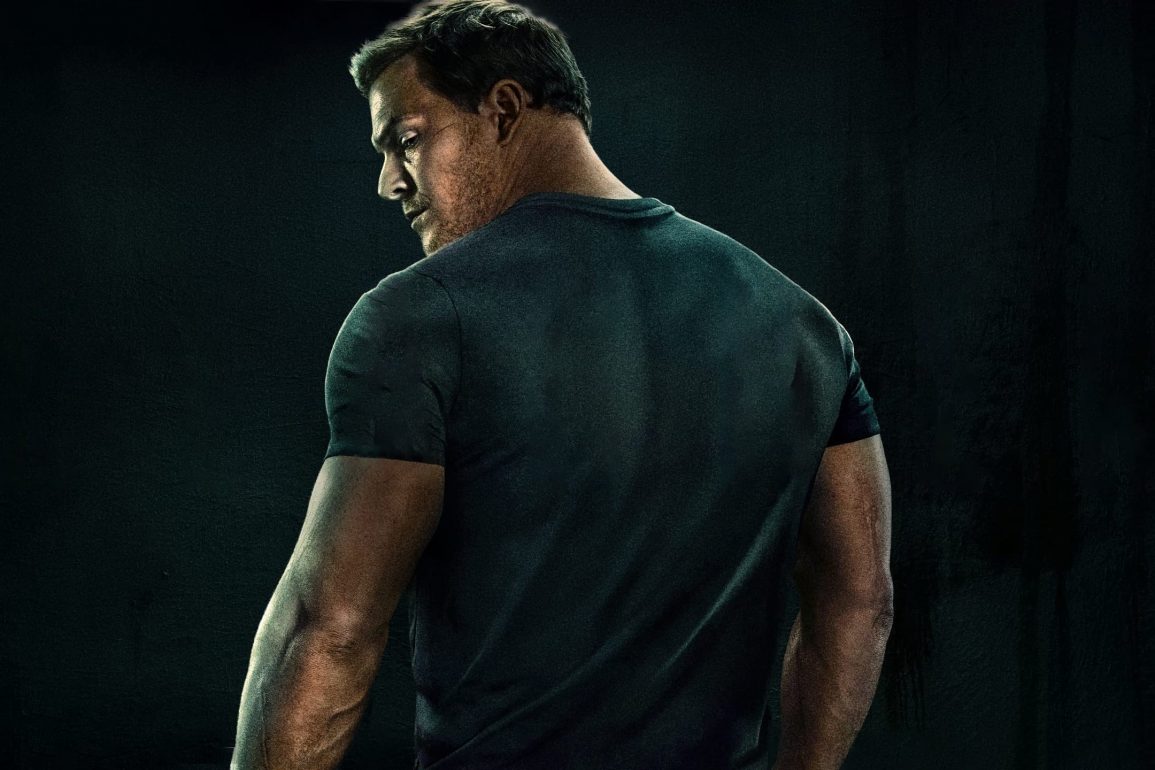 Reacher is a welcome return of the beefcake action hero who has the brains to match his brawn. We get one-liners, fight scenes, shoot-outs and memorable characters making this a show well worth binging. Bring on Season 2.

Plot: Jack Reacher was arrested for murder and now the police need his help.

Review: I have to confess that I have never read any of Lee Child’s Jack Reacher novels; I’ve always wanted to but just haven’t got around to it yet. So I’m judging this new series Reacher (based on the novel Killing Floor) currently streaming on Amazon Prime on its own merits.

The Jack Reacher movies starring Tom Cruise were entertaining but fans of the books had complained that he was miscast and that the character of Reacher in the books is described as a blond, 6 ft 5 in (1.96 m) tall, 250-pound man, while Cruise is a 5 ft 7 in (1.70 m) tall brunette. So it’s understandable why fans were outraged at this casting choice.

This new series from Amazon stars Alan Ritchson as the title character and he is definitely more fitting for the role due to his massive build. I remember first seeing him in Smallville where he played Aquaman and in Reacher he gets a mini reunion with Kristin Kreuk (who played Lana Lang).

I had no expectations before watching this series so I went in with an open mind and I can safely say that Reacher feels like a throwback to classic action from the 80’s and 90s.

Jack Reacher himself is a beast and it’s a running joke throughout the series how huge he is with Ritchson perfectly cast. He can handle himself in a fight coming across as the classic invincible badass but he also has the brains to match his brawn. He’s not afraid to get his hands dirty if it means doing the right thing while rarely getting sentimental or close to anyone emotionally.

It’s refreshing to see a character that isn’t miserable all the time but cracks one liners like he does necks; this series is like a return of the classic action hero with a modern twist and I’ve missed shows like this.

Reacher is a drifter who wanders the country looking for people to help reminding me of old school action shows like Renegade. At the beginning of this season he gets off a bus in the town of Margrave, Georgia (but actually filmed here in Toronto) and within minutes is arrested for murder but all is not what it seems in this small town. He grudgingly befriends two police officers – Roscoe Conklin (Willa Fitzgerald) and Oscar Finlay (Malcolm Goodwin) and they work together to discover what is going on with more bodies dropping daily and a mystery that deepens with every episode.

The tone is practically perfect here with some nice moments of humour, a good mystery to solve and some twists to the story. This show is far grislier than the Tom Cruise films which were PG-13 so this gets quite graphic at times but never overly gory; it’s mostly what we see after the violence has happened.

I think adaptations of books like this work better as television shows rather than movies as we get time to really explore the characters and build the world rather than having to rush it into a 2-hour runtime. I found myself genuinely caring for not only Reacher but Roscoe and Finlay. They are all immediately appealing characters who get their respective moments to shine, and they have an excellent rapport with Reacher. It doesn’t take them long to realise that he isn’t the bad guy but still is no nonsense and it’s like he can’t help leaving a trail of bodies in his wake.

We get regular fight scenes and shoot-outs and at one point Reacher even suits up for war just like in Commando; the finale is wonderfully satisfying and we even get a return of the epic bad guy death (especially in that last episode).

I’m not going to go into any more detail in terms of story or who the villains are so I don’t spoil anything but if you’re looking for a new action TV show to binge this is it.

Is it perfect? No, some of the dialogue I was saying before the characters were so it was a little predictable and it is a little formulaic at times. There is also a CG explosion in the final episode but it’s not bad and I’ve seen far worse; I’m literally just nit-picking here.

Overall, Season 1 of Reacher is the one of the best action shows I’ve seen for some time and it’s a welcome return of the old-school action hero who spews one-liners like he breaks necks. Season 2 has just been officially announced (entitled Reacher: Round 2… probably) so I’ll be there to see where our hero goes next and we can guarantee we’ll need a whole load of body bags.