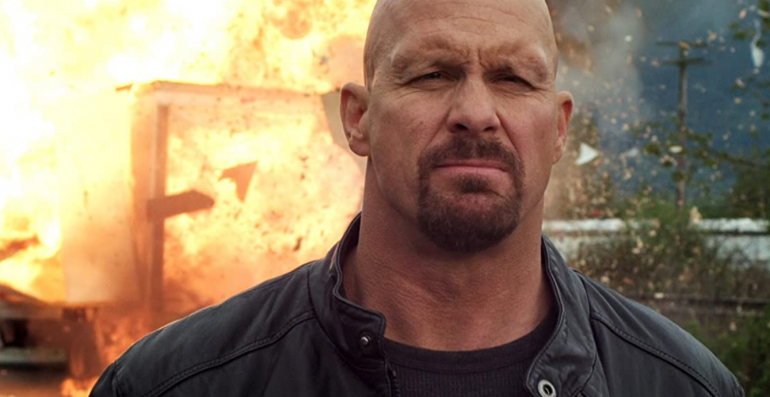 Plot: A cop turns vigilante after his family is murdered, exacting vengeance on the killers – and then on all criminals who have slipped through the system.

This year is the 10th anniversary of Recoil starring ‘Stone Cold’ Steve Austin and Danny Trejo and I realized I don’t have a review on the site so today seems like as good a time as any.

I miss Steve Austin from action movies; he only did a few but he was always believable when it came to beating up the bad guys; Hunt to Kill, The Condemned and Recoil are my personal favourites of his starring roles.

Recoil may be low in budget, but it isn’t short on action with fight scenes every few minutes and Steve Austin at his invincible badass best all while driving around town in an awesome muscle car.

Austin plays Ryan Varrett, an ex-cop whose family was murdered by a biker gang so he sets out on a rampage of revenge to take out those responsible. So nothing we haven’t seen a billion times before but I’m a simple man with simple tastes. Sometimes I just enjoy watching vigilantes take out the trash and Ryan does it with ease, punching, burning and exploding all in his path until he gets to the final big boss Drake (played by Danny Trejo).

Trejo makes for an enjoyable antagonist who is suitably nasty so you know the final showdown will be satisfying and it doesn’t disappoint. I like the little nod to Machete in the final fight when Drake is looking at weapons and is about to reach for a machete but grabs another weapon instead.

Serinda Swan is appealing as kindly motel owner Darcy however; it’s a shame she is only there to be rescued by Ryan at the end.

I’m pretty sure Lochlyn Munro plays the same character in every movie; he’s always a cop of some kind or the corrupt friend that can’t be trusted. Maybe there’s a Munroverse and every movie he is in is connected in some way. In Recoil he plays Agent Frank Sutton and he helps Ryan in his quest to rid the small town of the plague of bikers. It should be noted that the town in the film is called Hope, WA. which is the name of the town in First Blood so maybe these are in the same universe…

Overall, Recoil does exactly what it says on the tin with Steve Austin bringing the pain to various scumbags, regular fight scenes and he even walks away from an explosion in slow motion. Sold.