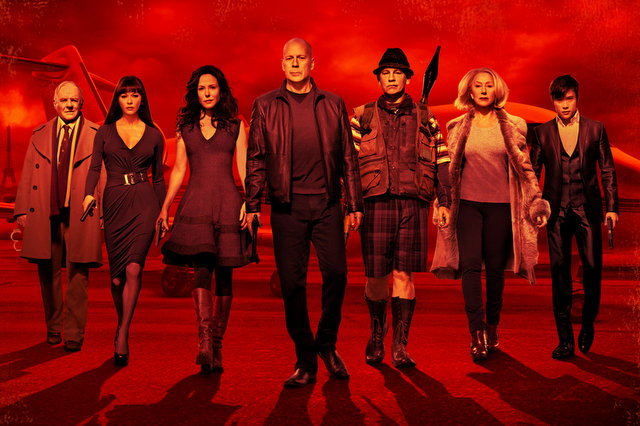 RED 2 isn’t amazing but it is a lot of fun and has some good action scenes; it’s a shame the script isn’t all that memorable. Maybe with the inevitable 3rd movie, they’ll get the formula right.

Review: It’s funny how the trailers to this movie didn’t make me want to go see it on the big screen; the first RED was entertaining but forgettable fun and the same can be said for this one.

I wanted it to be really funny but it just wasn’t as good as it should have been. There were a few laughs to be had but some of the humour fell flat and the tone was uneven. My problem with the RED movies is they don’t really know if they are comedies or action thrillers so you aren’t quite sure when you should laugh or not.

Bruce Willis shows a little more personality than he has done for the past decade but he still seems bored.

The supporting cast includes John Malkovich and Helen Mirren returning and are both the highlights of the movie. It’s nice to see Catherine Zeta-Jones on-screen again as she’s been quiet for a few years. Her role was quite small but she still looks great and had more chemistry on-screen with Willis than the annoying Mary-Louise Parker whose character I didn’t like in the first movie either.

The twist regarding Anthony Hopkins was predictable and I saw it a mile off as soon as he came on-screen. He was still fun in it though and it’s good to see him tackle something a little different.

It’s well paced and I wasn’t bored for a second; it’s good entertainment for a Saturday night and forgettable fluff. It’s also better than the last Die Hard movie… but then so is going for a root canal.

Overall, RED 2 isn’t amazing but it is a lot of fun and has some good action scenes; it’s a shame the script isn’t all that memorable. Maybe with the inevitable 3rd movie, they’ll get the formula right.