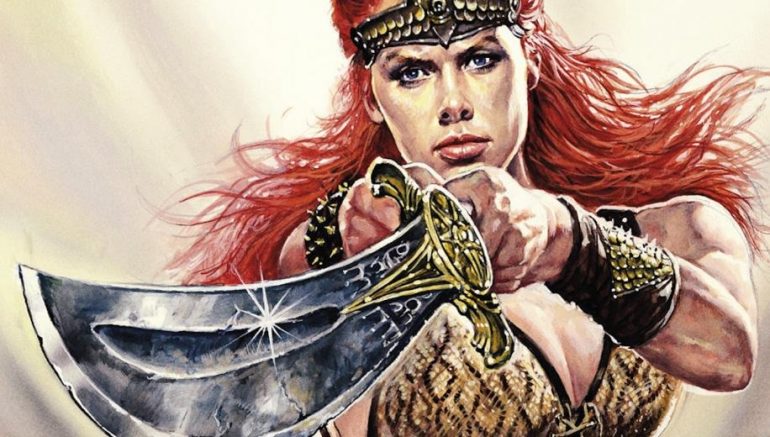 Red Sonja never reaches the heights of Conan and Arnold is the saving grace with his sheer charisma; it has some fun swordfights and it is at least short but the forgettable dialogue and Brigitte Nielson’s wooden performance make it rather dull. The 4K isn’t really worth forking out your cash for either.

Plot: Arnold Schwarzenegger, who muscled his way into screen action lore as Conan the Barbarian and Conan the Destroyer, returns to the sword-and-sorcery realm as Kalidor in Red Sonja, based on stories by Conan creator Robert E. Howard. Brigitte Nielson is the flame-haired heroine Sonja, leading a glorious quest in a mystical land where fortress wall have faces, dinosaur bones form a bridge, a lethal mechanical serpent writhes, swarming minions follow a vile queen (Sandahl Bergman)… and where heroes lay claim to legend.

Review: I recently picked up the new 4K release of the fantasy epic Red Sonja starring Arnold Schwarzenegger and Brigitte Nielsen as I realized I didn’t own the movie in any capacity. I’ll admit I never really loved this movie as it lacks the scale or memorable dialogue of Conan; Arnold unsurprisingly steals the movie as the awesomely named Kalidor, who is really more of a sidekick, but despite Sonja’s near constant saying she doesn’t need a man’s help she would be pretty screwed without him.

Nielsen doesn’t make a huge impression and her line delivery is wooden; she shows little in the way of any emotion or personality so we never really care about her or her quest.

Prince Tarn (Ernie Reyes Jr.) and his servant Falcon (Paul L. Smith) are there to provide some comic relief however, I find Tarn mostly insufferable but he does develop as a character and becomes a hero by the end. Paul L. Smith brings some quiet dignity to Falkon and we’re never really told why he is so loyal to Tarn as he certainly doesn’t deserve it.

You may recognize the main villain in Red Sonja; in Conan the Barbarian Sandahl Bergman played Valeria who was the love of Conan’s life, but in this movie she plays Queen Gedren. She isn’t in the movie enough to really have any feelings about either way and the fact the film is only 89 minutes long means it’s all over a bit quickly. I do love my short movies but with a tale like this it could have benefited from a bit of a longer runtime.

There are regular swordfights and the film is for the most part well-paced although it could have done with bigger set-pieces and when Arnold isn’t on screen it is less interesting; he really did have fantastic charisma and it’s no wonder he become such a huge star.

Ennio Morricone provides the score which has its moments but is surprisingly forgettable and not one of his best.

Keep your eyes open for several cast members from Raiders of the Lost Ark including Ronald Lacey, Pat Roach and Terry Richards.

In terms of special features the 4K has a few featurettes which are relatively interesting exploring the making of the film as well as Arnold’s rise to fame. The picture quality itself isn’t the greatest and I think my disc was faulty as it kept freezing at various points despite there not being any dirt on it. The audio is fine and I like that it has subtitles even if they do spell the villain’s name wrong. The fact this has had a 4K release but Conan hasn’t is a disgrace and I hope that gets rectified ASAP.

Overall, Red Sonja is harmless fun but it’s a disappointing conclusion to Arnold’s Barbarian trilogy and it’s too bad we didn’t get a third Conan picture instead. He makes the movie watchable and the 4K has a few interesting special features but I’m not sure it’s worth shelling out your hard earned cash for.