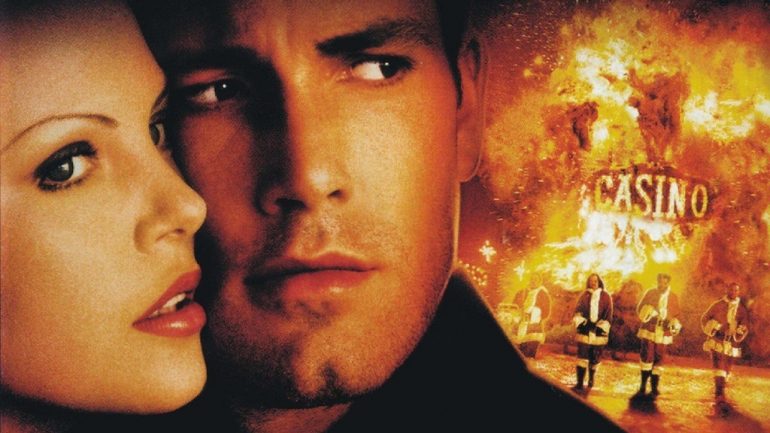 Plot: Just released from prison, all Rudy Duncan (Ben Affleck) wants is to start a new life with Ashley (Charlize Theron), the girl of his dreams, whom he met through pen pal letters in prison. But between them and happiness stands her crazy brother, Gabriel (Gary Sinise), and his motley crue of deadly criminals who think Rudy has some inside information about a casino where he once had a job — a casino Gabriel and his short-fused posse plan to take down.

For the longest time I thought I had never seen this movie then when I sat down to watch the Director’s Cut the other day it all came back to me; in the UK Reindeer Games has the more generic title of Deception which I had indeed seen before but it had been a few years so I had forgotten how the story went.

Directed by the late great John Frankenheimer Reindeer Games is a stylish, tense, violent and darkly comedic heist movie with multiple twists to keep you guessing as to how it all will end.

I do think people are overly unkind to Ben Affleck who I really enjoy watching onscreen; his character Rudy (or Nick as is the identity he assumes) is an interesting protagonist because he isn’t all that sympathetic. He’s a bit of an asshole and essentially deserves everything that happens to him so he’ll learn an important life lesson that crime doesn’t pay.

This is 100% Gary Sinise’s movie however, who has rarely been more threatening; he doesn’t need to say anything. He just looks with those eyes and is one of the most underrated villains of the early 2000’s. Gabriel is completely unhinged, unpredictable and unsympathetic (nice Alliteration there eh?) which is the best kind of villain.

Right from the start you can also tell that something isn’t right about Charlize Theron’s ‘Ashley’ who is far too perfect and nice; people aren’t like that in real life… I also should point out that Charlize is naked at several points in this movie.

Frankenheimer loved to do close ups of faces in this movie and the camera work helped to create the feeling of being trapped (which Rudy essentially is) and it really amped up the tension.

There is plenty of hard R violence and the Director’s Cut has a few added moments of characterization, sex and violence.

We find out more of Rudy’s backstory where he provides some details about his father, the sex scene is more graphic, Denis Farina’s scene with the Native Americans is a little longer and a few other moments in the casino are extended. In this cut the heist is a little longer too showing more guards getting shot and it generally ups the violence.

The script has a few humorous one-liners and I especially like when Gabriel is asked if they should steal the Christmas tree to which he responds “Yeah!” incredulously.

It’s still absolute nonsense and kind of unravels by the end as there are few too many unlikely twists and the way Rudy acts sometimes despite his life being in danger stretches believability.

Despite that Reindeer Games remains another Christmas Gem worth exploring; and this one is definitely a Christmas movie as it has our robbers dressed as Santa Claus and the bad guy is called Gabriel (after the angel). There are also various Christmas songs throughout so you never forget what time of year it is set.

I’m not sure if I prefer the theatrical or director’s cut but both are entertaining and make for a fun watch especially during the holidays.