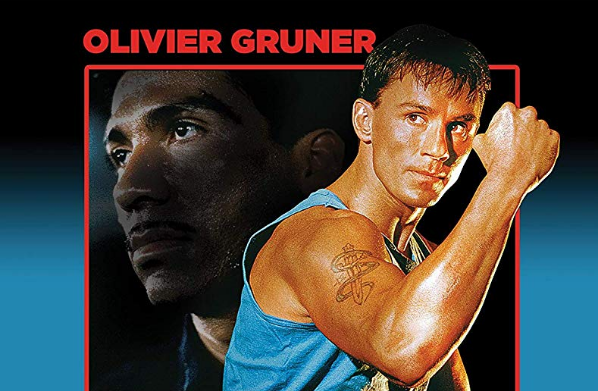 If you haven’t seen this movie best move along as I talk spoilers.

Plot: A graduate student and martial-arts expert rents a room in a house owned by a single mother who lives there with her son. A local street gang is trying to recruit the son, but the new tenant tries to help the boy’s mother keep him out of the gang. When they learn of this, they target both the mother and her new tenant.

I always considered Angel Town Olivier Gruner’s best film alongside Nemesis which incidentally I bought the two movies in a double pack recently.

Although it’s a B-movie with some ropey acting it’s massively entertaining with a genuinely engaging story and plenty of action.

Gruner plays Jacques, a French student who comes to the US and is forced to live in a ghetto. It’s overrun by gangs and he can’t help but get involved when he sees trouble. He makes enemies with the local gang leader when trying to defend his landlord and her son and it slowly grows into a war building up to an explosive climax.

What’s interesting is that Jacques is actually a bit of a dick and at times is hard to sympathize with at one point even suggesting that the landlord’s son Martin (Frank Aragon) actually join the gang just to make his life easier. Jacques has a history of dealing with bullies, so he learned to fight and his skills come in useful when he keeps coming across the Hispanic gang members who just needs their asses kicked.

I find it funny how there is almost a sense of honour where the fights are normally hand to hand when in real life the gang members would likely just shoot you and that’d be the end of it. That would make it a short film though and the fight scenes are plentiful and nicely done. I liked how Jacques isn’t an invincible badass but struggles during the fights and gets injured making him more believable; he does have a tendency to disappear a lot throughout the movie and then conveniently appear at just the right moment….

Despite coming out in 1990 the movie still holds up aside from the Hispanic stereotypes where everyone says “Homes” and “esse” a lot. I find they are all one-note characters who are merely there to get beat up. You’ll hate them all though but I often wonder why Martin and co. don’t just shoot them all when they have guns… problem solved.

I need to mention that Martin isn’t particularly sympathetic either and comes across as a little bitch; he gets chased around by the gangs then is rude to people who try to help him. Ass.

It’s quite an intense tale with no shortage of action but it also has heart too. I like the veteran character Frank (Mike Moroff) who is wheelchair bound with no legs and at one point when he sees Martin being chased he breaks down and cries for feeling so helpless but he rises to the occasion later making him a truly heroic character. What’s amazing is that he’s an old man and his name is Frank and he lives to see the end credits… weird.

Overall, Angel Town remains a bit of a Gruner classic with plenty of fights, an entertaining story and satisfying finale so if you haven’t seen it then check out the new MVD Blu-ray/DVD which has been nicely remastered..