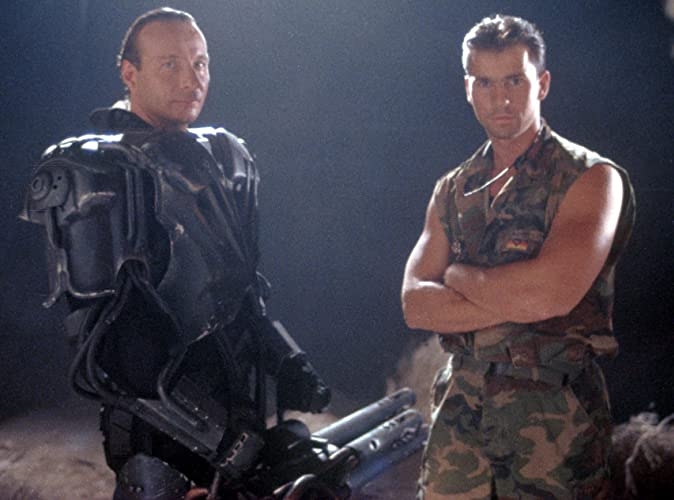 I was reading somewhere last week that if you watch trashy movies it demonstrates a high intellect. So while I was waiting for my application for Mensa to go through I thought I’d sit down and watch the cult classic Digital Man starring Matthias Hues.

The movie was never going to win awards but it certainly delivers the B movie goods with constant action and a huge body count.

The plot is about an out-of-control robot that is inadvertently set loose in a small community, and a crack squad of soldiers are sent to hunt it down. As the story progresses, the members of the squad begin to suspect that some of them could also be robots. I hate when that happens with people I work with…

So it’s essentially a Universal Soldier/Terminator/RoboCop mash-up and frankly it’s still really entertaining. I always liked how Matthias Hues’ Digital Man wasn’t actually the bad guy but was just following his programming whereas the real villain General Roberts (Ed Lauter) was pulling the strings behind the scenes and literally killing anyone who would get in his way.

The rest of the supporting cast includes Don Swayze, Adam Baldwin and Paul Gleeson who all do the best with what they’re given but I gotta say that Swayze and his wife character were the “comic relief” rednecks that I just wanted to see get shot. They were just so annoying as were pretty much the rest of the townsfolk who were mostly terrible.

Our “heroes” who may or may not also be robots aren’t particularly interesting characters either so you never really root for any of them or care when any of them die. Personally, I was on Team Digital Man and wanted him to wipe everyone out.

Like I said, there is tons of action and even has a climactic fight between Digital Man and one of the “heroes”. It’s nice to see real explosions galore and cool guns and it never lets up for a second.

The effects are obviously pretty dated now too and if you were to watch it for the first time you would just laugh at it but you’d be missing a highly entertaining 90’s B movie that’s perfect for a drunken Saturday night.