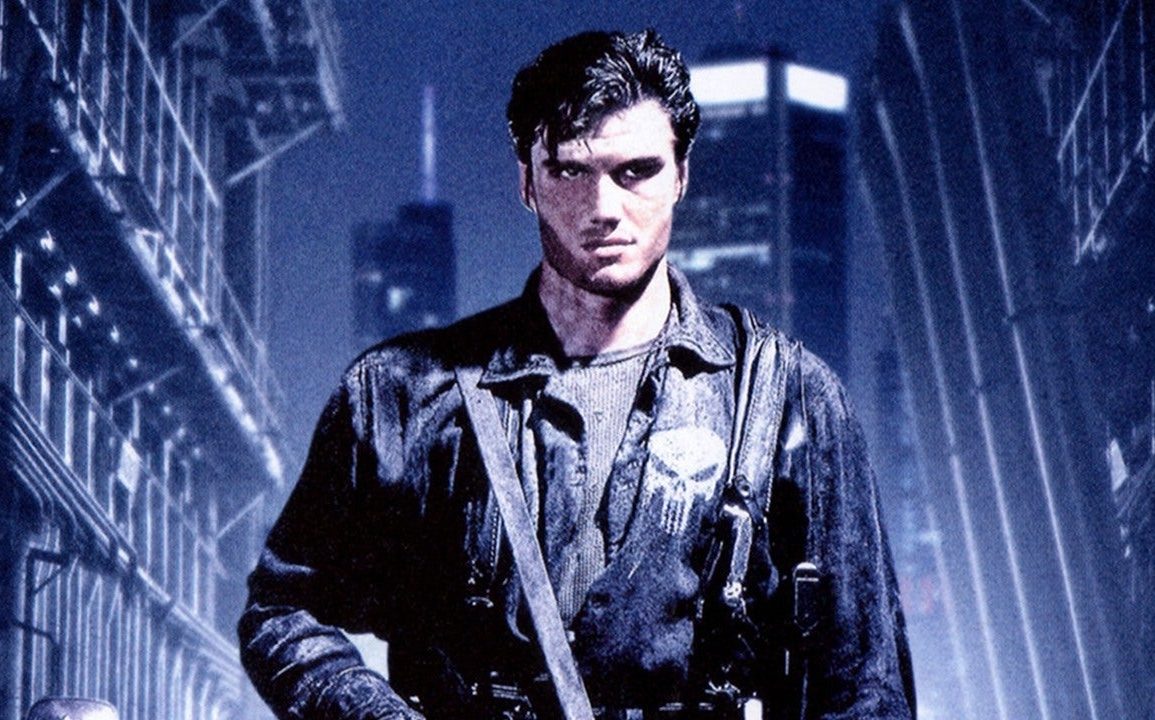 Remembering Dolph Lundgren as The Punisher (1989)

After revisiting Thomas Jane’s interpretation of Marvel’s The Punisher a few people asked if I would do a retrospective on Dolph Lundgren’s take so here we are.

It had been a while since I last watched the 1989 Punisher and I had forgotten just how awesomely action-packed it is. Although we all hate that Dolph’s Frank Castle never dons the skull emblem he does incorporate it on to his awesome knives so we’ll that go.

At an hour and 28 minutes long The Punisher moves at a breakneck pace with near constant action and Frank is at his brutal best; the Punisher Max comics will always be my favourite incarnation of Castle and I think Dolph manages to pull off that kind of vicious and uncompromising style. It gets straight into the action and doesn’t waste time going into too much detail with the backstory; we get that his family was killed by gangsters, so he becomes The Punisher and that’s all we really need.

I know it isn’t exactly comic accurate and to be honest I think Jon Bernthal’s version is probably the most accurate in that sense but for sheer balls to the wall 80’s style action then Dolph’s Punisher still rocks.

He’s as merciless as can be taking out anyone he sees as “guilty”; before it was released the film had to undergo several cuts due to the graphic violence and there has been a workprint floating around online for a while; I’ve posted a few clips below to give you an idea of what was cut.

It’s understandable why some of the footage was removed as it maybe killed the pacing in parts but it’s fascinating to see what didn’t make the final version and there are a few scenes I would have liked to see back in it.

In case you’ve been wondering just how many people Frank Castle kills in this movie as it seemed to be a lot he takes out an impressive 76 scumbags. Well done, Frank!

Dennis Dreith’s music score doesn’t have a particularly memorable theme but it works for the action scenes and is suitably thrilling and a welcome shot of adrenaline.

This is the second movie I’ve watched this week with Jeroen Krabbé as a villain (the other being The Living Daylights); I liked his mobster Gianni Franco who loved his son more than anything so he was a loving father rather than a one note antagonist and a part of me wanted him to survive at the end but he was a criminal so he simply had to go.

The real villain of course is the Yakuza boss Lady Tanaka (Kim Miyori) who is one of the few people more sadistic than Frank so she is a worthy opponent; I do think she gets killed a little too quickly but it’s still a satisfying payoff.

Louis Gossett Jr. was a staple of the action genre in the 80’s (retrospective of the Iron Eagle movies coming soon FYI) and he plays Frank’s ex-partner Jake Berkowitz and has spent the past 5 years looking for Frank never believing that he had died in the attack on his family. Unlike Jimmy Weeks in 2004’s Punisher Jake is a true-blue hero who has his own demons (like alcoholism) but he is a loyal friend of Franks.

Micro doesn’t show up but instead we have Barry Otto as Shake who is a drunken thespian who feeds Frank information occasionally; at first you think he is going to be merely annoying comic relief but he is more like Frank’s conscience reminding him that there are still good people that need saving.

The Punisher: Work in progress.

The Punisher: You’re a good boy, Tommy. Grow up to be a good man. Because if you don’t… I’ll be waiting.

The Punisher: I still talk to God sometimes, I ask him if what I’m doing is right or wrong, I’m still waiting for an answer, and until I get one, I’ll be waiting, watching, THE GUILTY WILL BE PUNISHED!

While snooping around the internet I found some interesting trivia about the movie from IMDB:

All of the fight sequences were performed with real contact by the actors to give the fights a sense of realism and because the Kyokushin karate champions Kenji Yamakiand Hirofumi Kanayama’s sense of honour would not allow them to fake it.

Dolph Lundgren physically prepared for the film by revisiting the training regimen from his days as a competitive martial artist. During production, he weighed 220 pounds – the same weight he held as an international karate champion.

Instead of hiring stuntmen to portray the Yakuza combatants, the filmmakers specifically hired competitive Kyokushinkai karatekas and trained them to perform their own stunts.

Producer Robert Mark Kamen revised and rewrote Boaz Yakin’s original screenplay to make a few changes including adding a ‘Lethal Weapon’-like prologue which was filmed but ultimately omitted in the editing room, only leaving flashbacks, like in Yakin’s initial script.

The original ending climax that was filmed was a little different, and was deleted and replaced by a reshoot: Tommy wrestles with Franco over the gun, trying to stop Franco from shooting Castle, but Castle manages to stab Franco in the back with a knife, killing him. Tommy aims his father’s gun at Frank swearing that he will kill him, Frank instructs Tommy on how to use a gun and he forces Tommy to aim the gun at his forehead and shuts at Tommy to “DO IT!!!” But Tommy cannot bring himself to kill Frank and breaks down into tears, burying his face in Frank’s chest. Like in the final cut, Frank tells Tommy to grow up and be a good man or he will be waiting for him if doesn’t and leaves. Jake arrives and follows a trail of Frank’s blood to the rooftop, but Frank is nowhere to be seen, Jake cries out Frank’s name and the camera zooms out and fades to black. One of workprint versions ends with a pan up the Punisher from his boots to the head, as in the scene with the miniature truck.

Overall, after all these years The Punisher is still an awesome actioner with Dolph Lundgren in a role he was born to play; he looks the part and is believable in all the action scenes (of which there are many). It’s too bad we never got to see him in future sequels but as the film wasn’t particularly well received then it’s understandable why.