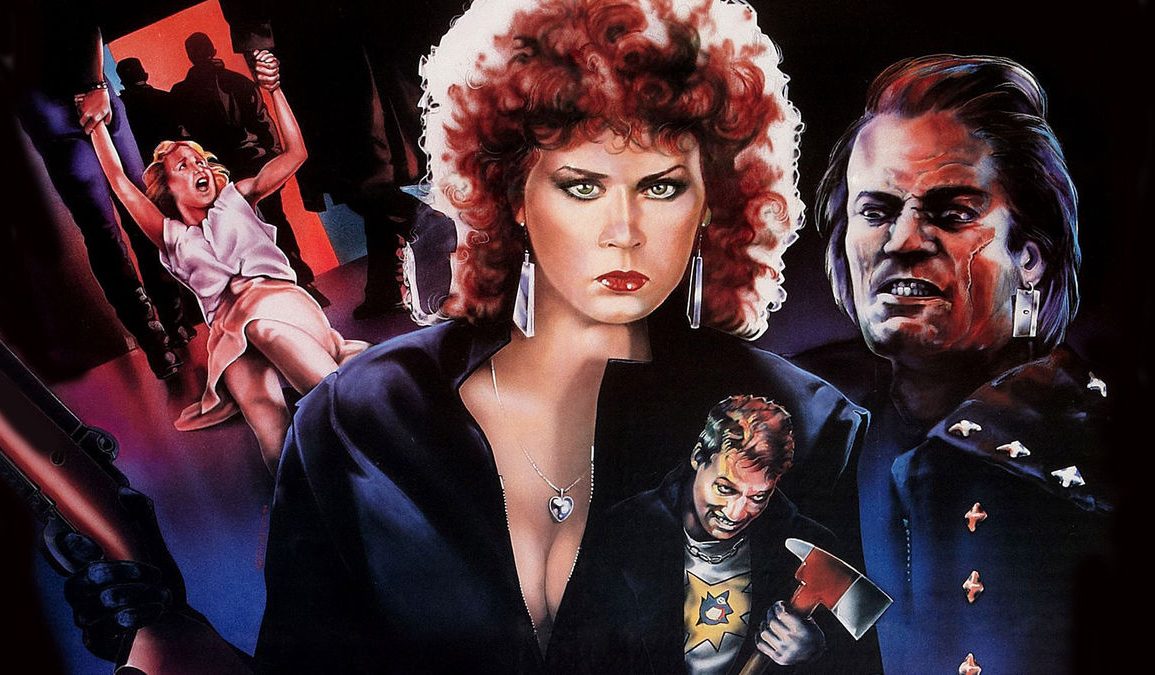 Plot: After a night out in the streets of L.A., the lively high school student, Brenda, and her all-girl team, The Satins, decide to play an innocent prank on the brutal street gang of dope-dealers, The Scars. But, before long, Brenda’s beloved deaf-mute sister, Heather, catches the eye of their vicious leader, Jake, who, with the help of his companions, sexually assault the defenceless girl, leaving her for dead as payback. Now, there’s no turning back, and as blood demands more blood, a deadly Brenda sets out on a violent journey of retribution to settle the score. Her friends are some lethal bear traps and a mighty crossbow. Who can stand in the way of the leather-clad female avenger?

I’d only watched Savage Streets once before years ago but I saw it on good old Tubi the other day and figured it was time for a revisit.

Any movie which has dialogue like “Go Fuck an iceberg” is immediately a must-see for me even if it is a rather nasty tale like Savage Streets. I mean, it says “Savage” in the title so you know going in this is going to be a brutal exploitation picture and it delivers on that front.

Linda Blair is totally badass as Brenda, as she struts around town with her friends and deaf sister Heather. One night Brenda sees Jake (Robert Dryer) and his crew dealing drugs and she wants to teach them a lesson by stealing their car and dumping garbage on it. It’s no surprise that the gang come looking for retribution however, they take it out on Brenda’s sister Heather in one of the most disturbing scenes of Savage Streets. I normally can’t watch movies with rape but you want to see these scumbags get what they deserve and Brenda doesn’t disappoint in dealing out justice.

It takes a while before there is any ass-kicking so it’s really only the final half hour that has action but there are a few fights and the Scars gang are such monsters that every moment they are on screen is filled with tension.

Robert Dryer is formidable as Jake and it doesn’t take long before we discover just how unhinged he is; these are hateful criminals so their comeuppance is genuinely satisfying. It’s funny though how after two of the goons have been killed you can see them clearly still breathing… oops.

John Vernon nearly steals the movie as the school Principal and it’s him who says the iconic “iceberg” line. Blair does get some gems too though like “Sounds nice and kinky to me. Too bad you’re not double-jointed. Because if it were, you’d be able to bend over and kiss your ass goodbye!” You go, girl!

This is filled with awesome 80’s music but still keeps that sleazy grittiness from the time which adds to the film’s atmosphere.

The acting is pretty decent for the most part and we do get a totally unnecessary scene of Linda Blair naked in the bath so that’s a plus.

Overall, Savage Streets is still a disturbing picture with some truly hateful villains but Linda Blair is wonderfully badass as she takes out the trash and seems to completely get away with it too.