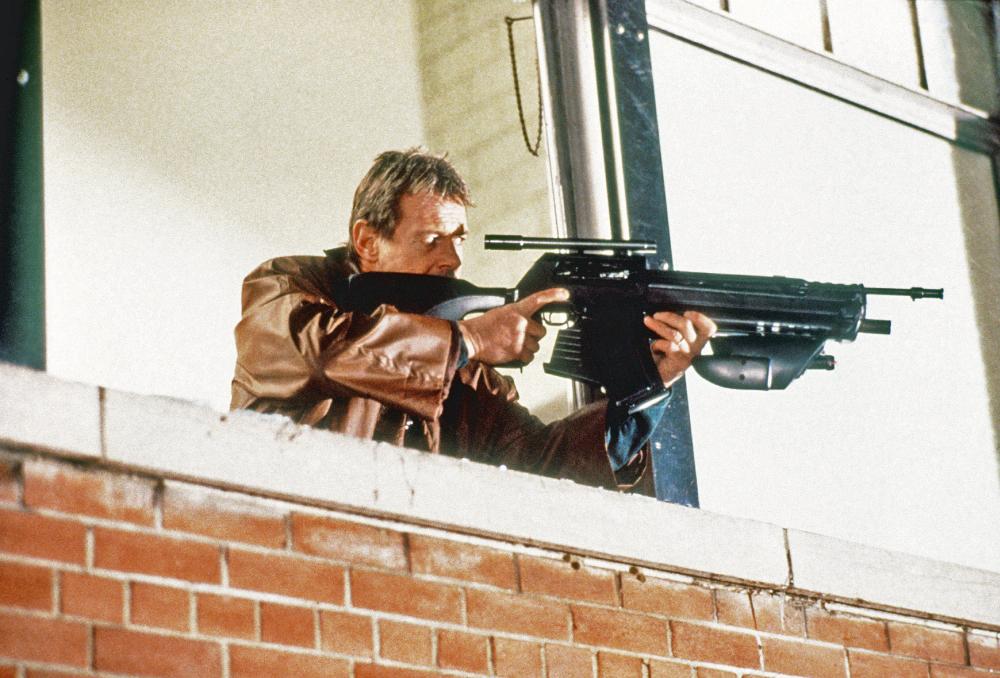 Plot: Boston, 2009. A police detective (Roddy Piper) searches for Adrian Dunn, his ex-partner (Billy Drago) who murdered his wife. Dunn has escaped from prison on the moon and returned to Earth with an alien virus.

Normally any movie that starred the late Roddy Piper and Billy Drago would be worth a watch and although Sci-fighters has its moments it is rather disappointing mostly because it is all so darkly lit so you can rarely see what is going on. I had to turn the brightness up to max on my TV but I still could barely see anything.

It’s currently on Amazon Prime but I’m not sure it’s worth your time unless you’re a big fan of both actors as I am. Piper was well cast in these kinds of roles as renegade cops as he could play them with ease and it’s hard to picture anyone else as Det. Cameron Grayson; as I’ve said before I like how when he fights there isn’t anything overly choreographed looking, he just punches and kicks his way through his opponents.

It does lack action for the first half and takes a while for things to get interesting; it’s mostly rather gross with Drago’s villain Adrian Dunn genuinely hard to look at as his make up is so repulsive so I guess they did their jobs there. Drago apparently sat for 4 and a half hours to put that make up on proving what a total professional he was as that would drive me crazy. He makes for a disgusting villain who no redeeming features so when he finally gets his comeuppance at the end it is well deserved.

You could argue that the real hero of this movie is Kirbie played by Jayne Heitmeyer as she is the one who actually defeats Adrian once and for all in the finale.

It has some cool 90’s style sci-fi ideas especially the eco-night which was an interesting concept. I’m not sure why the movie was called Sci-fighters as really the only big fight scene is at the end between Cameron and Adrian.

Apparently director Peter Svatek tried to get a PG-13 rating which is why most the swearing is dubbed but the subject matter and gruesome effects guaranteed the R rating.

The score and general atmosphere work well even if it doesn’t have a huge budget; the showdown on top of the building is satisfying enough and someone finally remember to turn the lights on so we can see what’s happening.

Overall, Sci-fighters is hardly classic action cinema but if like me you are a big fan of Roddy Piper and Billy Drago then you can check it out on Prime now.