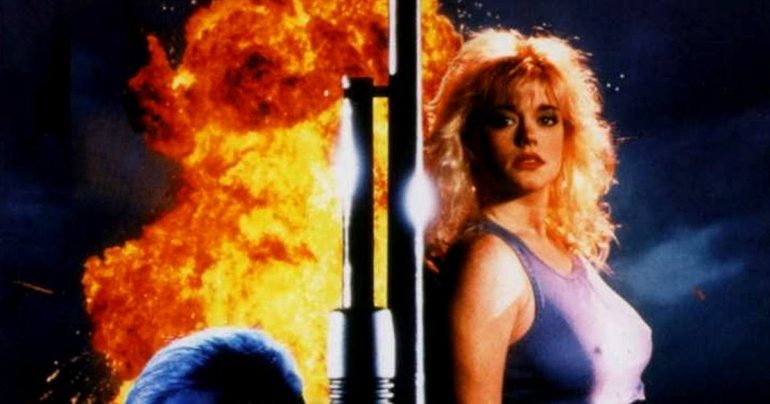 Shotgun was one of PM Entertainment’s earlier movies but also one of their weakest… and yet it still manages to entertain mostly for all the wrong reasons. It has every single 80’s cop movie cliché in the book including a renegade police officer called Ian Jones (Stuart Chapin) who can’t play by the rules when some sicko starts beating up hookers, one of which just so happens to be his sister who winds up dead.

This pushes Jones over the edge and after going too far he is suspended from the force and becomes a bounty hunter; he’s just so badass at his new job that perps start to call him ‘Shotgun’ Jones because of because naturally it’s his favourite weapon of choice. I wish I had a nickname like that rather than “hey Asshole!”…

Jones is played by the late Stuart Chapin who sadly passed away back in 2016. He only had a few acting roles and Shotgun was one of his most memorable. He actually had far too gentle and kind a face to be believable as a badass cop and the cardigans he wore didn’t help either.

Shotgun looks like it was filmed with a budget of 5 dollars so the sound and picture aren’t the greatest but it does add to the exploitation vibe which the movie has right from the start. It’s quite a seedy little tale and to be honest it took about 20 minutes to work out who the protagonists were as our two leads weren’t all that exciting to watch on screen. The first half is also more of a thriller with the action going into high gear in the final 20 minutes and nearly it’s worth the wait.

Jones goes into one man army mode and drives a big ass armoured vehicle to Mexico to find the bad guy while blowing lots of shit up on the way.

The best thing about the movie is the music; it has righteous electric guitar from beginning to end which is so loud it will at times scare the crap out of you. During Jones’s preparing for war scene an awesome tune comes on with a female vocal singing “Jones! Deadly, Deadly Justice!”… or words to that effect. Hell yeah!

By reading this you may think the movie sounds awesome but it really isn’t; there are plenty of other better movies but for curiosity value and fans of PM Entertainment it’s worth checking out.