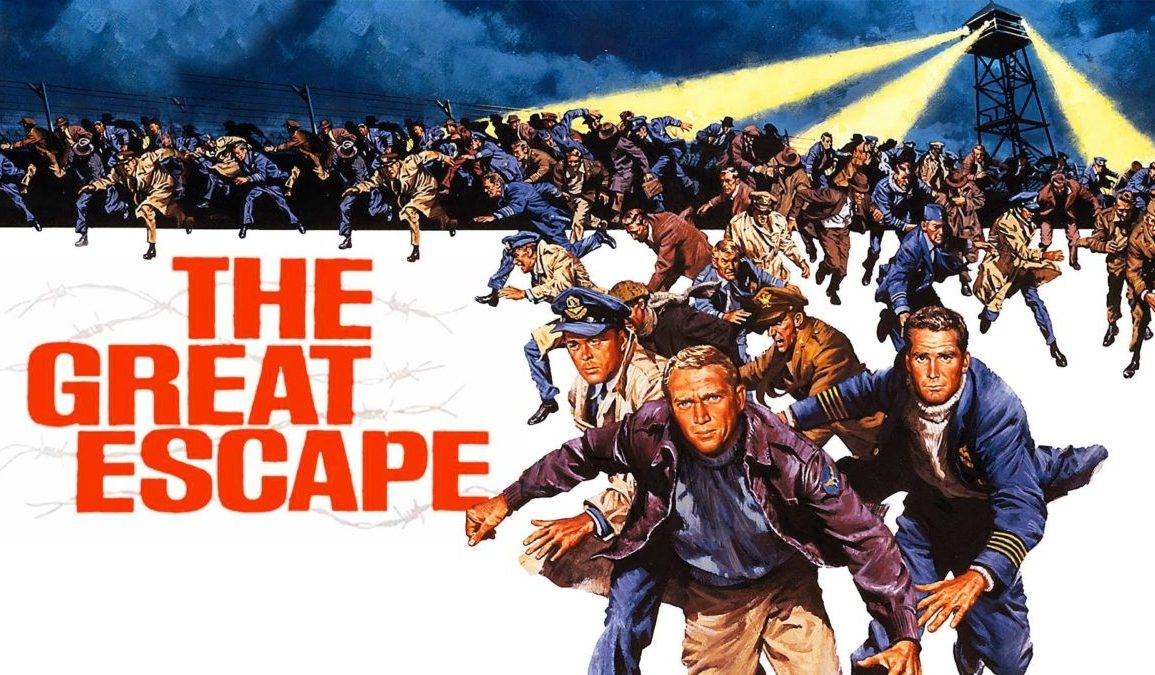 The Great Escape is a rousing adventure that has one of the best ensemble casts in cinema history including Steve McQueen, Charles Bronson, Richard Attenborough, James Garner, James Coburn, Angus Lennie, Donald Pleasence and David McCallum.

Based on a true story The Great Escape follows allied prisoners of war who plan for several hundred of their number to escape from a German camp during World War II.

At just under 3 hours long you would expect the movie to drag but it manages to engage and thrill to keep you on the edge of your seat from beginning to end.

It’s the type of film we just don’t see anymore and it truly is an all-time classic. You will care for each of the characters and understand their motivations so by the end you’ll have laughed and cried in equal measure.

Although Steve McQueen is the main protagonist there are long periods of time where he is locked away in The Cooler so the primary focus is really on Richard Attenborough’s Bartlett AKA ‘Big X’ who is the mastermind behind the escape. This is one of Attenborough’s most iconic roles and he is thoroughly believable in the role; when he finds out that Colin (Donald Pleasence) is struggling to see he tells him he can’t go with them as it could jeopardize the mission. As a man in charge it feels like the right decision and you can totally understand his reasoning.

Charles Bronson gives one of his finest performances to date as Danny AKA ‘Tunnel King’; I only found out recently that when Bronson was a coal miner in real life he hated being in tight spaces which they would incorporate into his character in The Great Escape. This isn’t Paul Kersey but one of Bronson’s most vulnerable characters who is scared and panics the longer he spends underground digging tunnels.

This may come as a surprise but my favourite character was actually Ives (played by fellow Scot Angus Lennie) who references Scotland regularly throughout including Argyle Street in Glasgow where I’m from. His scene in The Cooler with Hilts (McQueen) has some sparkling dialogue like Hilts: “What do you call moles in Scotland” Ives: “Moles” amongst several others.

The screenplay is flawless with the right amount of humour and camaraderie to make it all feel authentic; some of is mindbogglingly clever like making trousers where you can release dirt without people noticing which makes you wonder how on Earth someone could come up with that…

Elmer Bernstein provides one of the most famous movie themes in cinema history and it stays in your head for days after watching; I have tested myself to see if I can not whistle along with it every time it plays but I fail every time.

The final hour is packed with tension and action as our heroes escape from the camp but getting out of the camp was the easy part and not everybody gets to go home. There is some nice foreshadowing early on about McQueen’s character Hilts liking motorbikes so the seed is planted that the finale will involve him on one which as we all know is the case. He always liked to do his own driving stunts as much as he could and there are some amazing set-pieces here.

The movie has a surprisingly downbeat finale but I am at least happy that Bronson gets away at the end even if very few others do.

Overall, The Great Escape is a classic of the genre with one of the greatest casts of all time who are all at the top of their game; the dialogue is sharp, the stunts are amazing making for an old fashioned adventure the likes of which we just don’t see anymore.