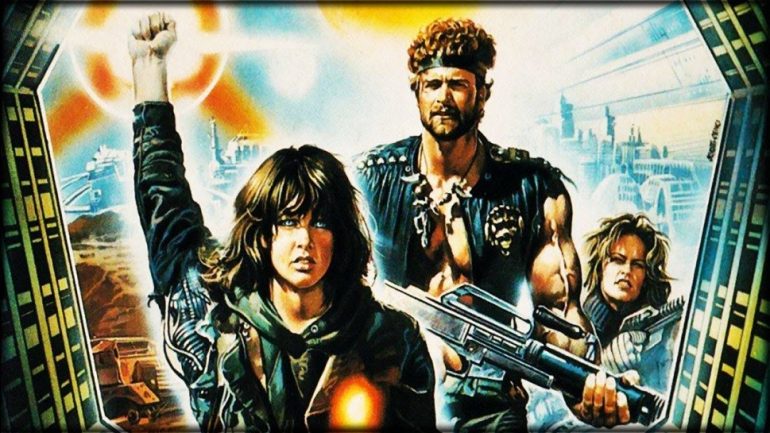 Remembering the Post-Apocalyptic Exterminators of the Year 3000 (1983)

Plot: In the year 3000, the Earth has been rendered a desert by nuclear war. A group of survivors goes in search of rare and valuable water, but standing in their way are the evil Exterminators, who live only to cause pain and misery.

Where would we be without Mad Max and its legacy? Throughout the 80’s and 90’s there were numerous knock offs and I usually find something enjoy in all of them. The post-apocalyptic genre is one of my favourites and you can never go wrong with the cheap Italian movies like this. The dubbing is pretty bad but as always it just adds to the entertainment value and the characters are so similar to Mad Max it verges on plagiarism.

Exterminators of the Year 3000 (which is a super catchy title) is packed with action including armoured vehicles vying for supremacy of the wastelands of the world after nuclear war has made the planet a desert. There are chases, explosions and regular killings but the interesting thing is that our main protagonist Alien (Robert Iannucci) is kind of a self-serving asshole making it hard to root for. It’s a good thing he’s cool so despite his failings we still want to him to save the day but what’s interesting is that he doesn’t.

Despite this being an Italian production, the original script was actually written in English which explains why the dubbing isn’t too awful.

The whole point of the movie is to find water and bring it back to the last remnant of society to keep our species going. A group of mutant freaks have been guarding the water and keeping it for themselves so it’s a surprise when they destroy it all at the end. *Spoiler alert* Just when you think the movie is going to have a downbeat ending it starts raining so nature is the real hero and nothing the characters do means anything… but at least there are cool car crashes.

Alicia Moro is a bit of a badass as Trash, who is tough as nails but is a good person at heart and wants to help Tommy (Luca Venantini) bring the water back to his people unlike Alien who wants to get rich and sell it to people instead.

It’s funny how this movie has a grainy low budget look but I feel with these movies it just helps in creating the atmosphere. It almost makes it look like a documentary that has been found after being buried in the sand for years. That’s what I get from it anyway…

Overall, Exterminators of the Year 3000 is an entertaining low budget Mad Max clone that delivers the post-apocalyptic goods and cheap thrills the kind of which I live for. If you like your movies glossy and with big budgets then maybe this isn’t for you but if you grew up with 80’s exploitation and trash then this will be your bag.