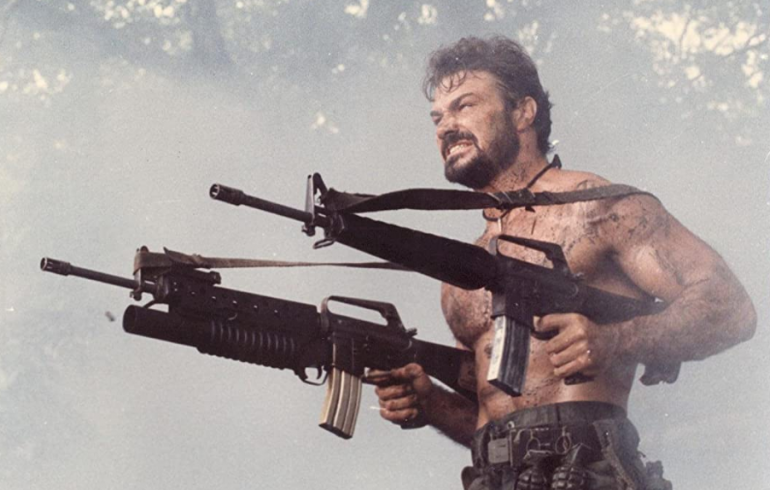 Mannigan’s Force AKA American Wardogs is a Filipino action film directed by Tata Esteban with a cast that includes George Nicholas, Eric Hahn and Mel Davidson.

It’s generic stuff and hardly classic material but I find after a certain number of beers there’s something to enjoy in everything. After all, how can you not enjoy a film with an opening like Mannigan’s Force where our hero guns down countless nameless goons in the jungle with two guns blazing?

Sadly, after this opening sequence they must have run out of budget as it never quite matches that level of awesomeness. It has its moments, and the best aspect of the entire film is the amount of squibs used. When people are shot one bullet is never enough; they get approximately 50 rounds put in them guaranteeing they will not be returning for a sequel.

Our lead George Nicholas certainly looks the part and we get a sweaty topless close up of his muscles as he prepares to go off to war and kick everyone’s ass. He looks like someone has spilled his pint and is about to completely lose his shit throughout the entire runtime. You’re hoping that by the end he’ll go into one man army mode but sadly it all ends rather quickly leaving you feeling rather flat. Mannigan crashes a van into a plane (which is admittedly awesome) and then the end credits start rolling.

There is no emotional engagement or characterisation whatsoever and the pacing drags in the second half but there are enough brutal kills to keep things moving.

Overall, Mannigan’s Force has an explosive opening scene but the rest of the film never quite lives up to it; it’s still a fun low budget ride with horrible acting and dialogue so grab that sextet of ale and drink until it’s awesome.