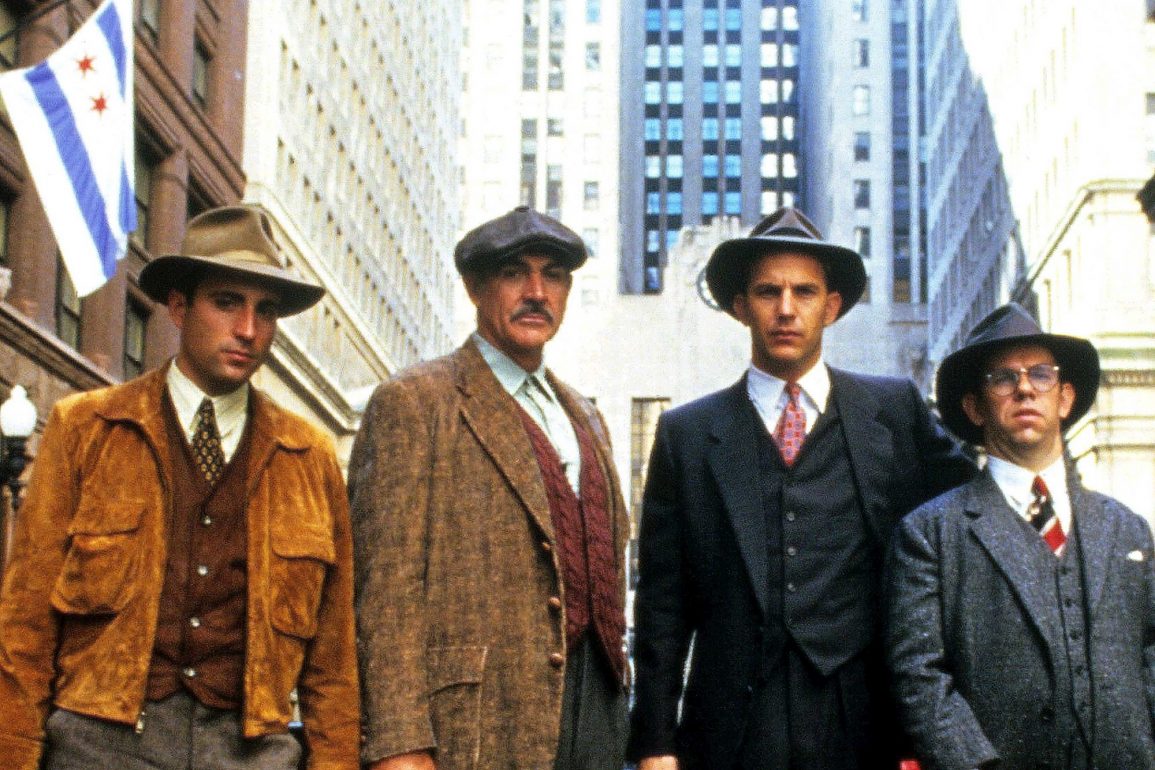 Plot: After building an empire with bootleg alcohol, legendary crime boss Al Capone (Robert De Niro) rules Chicago with an iron fist. Though Prohibition agent Eliot Ness (Kevin Costner) attempts to take Capone down, even his best efforts fail due to widespread corruption within the Windy City’s police force. Recruiting an elite group of lawmen who won’t be swayed by bribes or fear, including Irish-American cop Jimmy Malone (Sean Connery), Ness renews his determination to bring Capone to justice.

With the passing of Sir Sean Connery over the weekend (that still hasn’t sunk in yet) I thought now was a good time to revisit one of his most popular movies and the role that won him an Oscar – 1987’s The Untouchables from director Brian De Palma.

With a cast that includes Kevin Costner, Andy Garcia, Billy Drago, Charles Martin Smith, Sean Connery and Robert De Niro it’s easy to see why The Untouchables is so beloved. Its script is as razor sharp and quotable as ever with so many iconic lines like “that’s the Chicago way” and “what are you prepared to do?” just to name a couple.

Kevin Costner is perfectly cast as the do-gooder treasury officer Eliot Ness whose sole purpose is to take down Al Capone and his prohibition business. Capone isn’t going down without a fight however, so Ness will need help from a select group who haven’t already been bought and paid for by Capone.

These men are Jimmy Malone (Sean Connery), Oscar Wallace (Charles Martin Smith) and George Stone (Andy Garcia). All three are good men with Malone becoming a mentor to all the other cops providing various pieces of advice along the way. He is one of Connery’s most appealing characters coming across as tough but still a good man who believes in what Ness is trying to do.

De Niro is at his terrifying best even if he doesn’t actually sound like Capone but he radiates menace and the baseball bat scene is as shocking today as it was back in 1987 perfectly demonstrating that Capone is even more ruthless than anyone would expect. Capone’s “I want him dead” speech is one I quote from probably a little too often which doesn’t go down well at the office but whatever.

Billy Drago was the go-to villain of 1980’s action cinema and The Untouchables gives him one of his most despicable characters in Nitti (the man who would gun down Malone near the end of the film). Drago always made for an amazing antagonist with his fierce countenance and Nitti is so hateful that his death scene is one of the most satisfying of the entire movie.

There are some classic action sequences most notably the train station where the baby’s pram starts to roll down the stairs while a shoot-out ensues. At just under 2 hours The Untouchables for the most part moves along at a solid pace although I do find that a few scenes go on a little longer than they need to but I understand that they are used to build up tension. Some of it is also a little corny by today’s standards but I still love every moment.

Ennio Morricone provides the music score and it’s one of my personal favourites, especially Al Capone’s theme which somehow manages to capture the excesses and decadence of the character’s lifestyle.

Overall, The Untouchables is packed with memorable dialogue, bullet riddled shoot-outs and classic characters. Ennio Morricone’s score is wonderful really capturing the mood of the film perfectly making it all add up to a hugely entertaining crime epic.