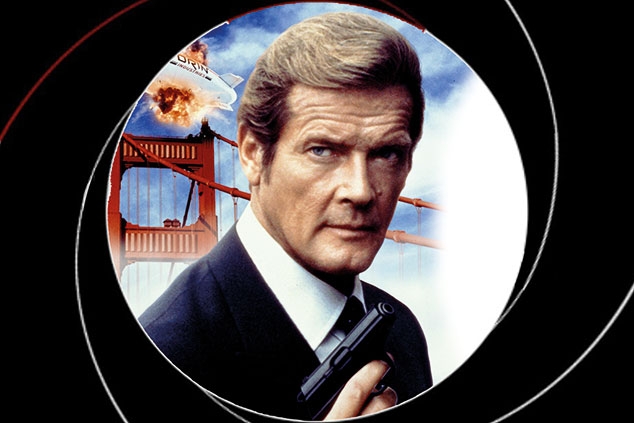 Plot: After recovering a microchip from the body of a deceased colleague in Russia, British secret agent James Bond (Roger Moore) discovers that the technology has the potential for sinister applications. Investigating further, Bond is led to Max Zorin (Christopher Walken), the head of Zorin Industries. Soon Agent 007 faces off against the villainous Zorin and his tough Amazonian bodyguard, May Day (Grace Jones), who are scheming to cause massive destruction that will eliminate the competition.

Widely regarded as one of the absolute worst Bond movies I have to put my head above the parapet and say “nay, good sir!” as I think A View to a Kill is actually awesome.

First of all I have always had a soft spot for the Roger Moore 007 movies and he remains my second favourite Bond after Connery (but joint with Dalton); they just had a sense of fun that is missing from the series now.

I watched A View to a Kill recently and forgot just how much there is to enjoy about it but one thing which really stood out was the high bodycount; during the end sequence when Zorin (Christopher Walken) starts massacring his own men it’s one of the most shocking scenes of the entire franchise.

Despite Roger Moore having a few classic one-liners the humour is kept to a minimum and I think Zorin is one of the best Bond villains; he’s genuinely sinister and Walken plays him as a Joker-esque cackling maniac who is a complete psychopath. I forgot that he was basically created through a Nazi concentration camp and has one of the darkest backstories of any of Bond’s nemesis.

Then we have Grace Jones who was a pure product of the 80’s and was utterly terrifying all the time no matter what role she played. She just always came across as nuts and in A View to a Kill she’s almost as crazy as Zorin however, once she finds out that he doesn’t care about her and leaves her for dead she has her own redemption story.

Duran Duran provided the Bond theme which is still one of the best of the series; I saw them perform it live a couple of years ago and it was incredible still holding up as a classic tune. John Barry’s score is one of his finest hours too adding some epic electric guitars to the action sequences.

It’s interesting how in this movie Bond doesn’t really have any gadgets and they were going for a more traditional 80’s action movie. Keep your eyes open for one Dolph Lundgren who makes his first appearance in this movie; he doesn’t have any dialogue but he was dating Grace Jones at the time and she got him a small role.

Alison Doody from The Last Crusade also shows up as one of Zorin’s goons and she is once again a villain but was so stunning that her evilness just made her more attractive.

Original Avengers star Patrick MacNee brings even more class to proceedings and shares some entertaining moments with Moore as he is undercover as his butler and receives some hilarious derogatory insults from Bond to “stay in character”. His demise scene put me off car washes for life…

There are some spectacular action scenes as you’d expect with a Bond movie and the firetruck chase through San Francisco is a definite highlight but I love the fight at the Golden Gate Bridge at the end and it’s one of my favourite finales to any Bond movie.

The fact that Zorin has his own airship is Austin Powers-esque in its brilliance as it’s such a wonderfully impractical and unsubtle vehicle for a villain to use.

I always loved Tanya Roberts as the Bond girl Stacey Sutton who was not just there for eye candy but she also had her own motivations for wanting to take down Zorin.

Speaking of Zorin I loved his diabolical plan to destroy Silicon Valley thus wiping out his competition; it was so maniacal and only made more amazing by Walken’s deliberate line delivery. One classic moment has him have a meeting in his airship with his cronies but one of his men thinks this plan is just too dastardly. This being a Bond film the man is quietly walked out, taken to some “stairs” which turn into a ramp ejecting him out of the airship to a horrible death below.

It’s not without its flaws; for one I think the sequence at the stables when Bond first meets Zorin at his (impressive) chateau goes on for far too long and the movie is over 2 hours sometimes dragging. Roger Moore also was starting to look his age as well so there are obvious stunt doubles during some of the action scenes.

To sum up I can admit A View to a Kill isn’t perfect but with a cast that includes Roger Moore, Christopher Walken, Patrick MacNee, Dolph Lundgren (kinda) and Grace Jones it has a massive bodycount and satisfying finale with one of the best Bond themes so it will always have a place in my heart.