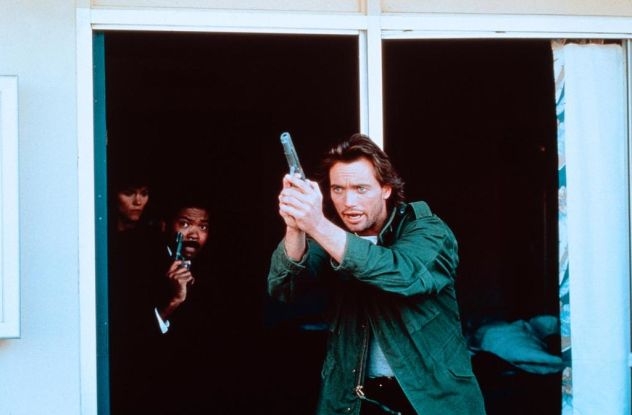 Action USA was stuntman John Stewart’s directorial debut and stars Gregory Scott Cummins as F.B.I. Agent Osborn who with his partner McKinnon (William Hubbard Knight) are assigned to protect a girl named Carmen (Barri Murphy) after her boyfriend Billy Ray (Rod Shaft) is murdered in front of her.

When the title of your movie is Action USA you can be pretty sure you’re going to be in for an explosively good time and for the most part Action USA delivers with out of this world stunts, explosions, nudity, bar fights and adrenaline fuelled car chases.

It has recently been restored and was briefly showing on Alamo on Demand, but I watched it last night and the remastering is faultless with crystal clear picture and audio.

Some of the acting isn’t exactly Oscar worthy and I have to be honest and say that the pacing strangely lags in the middle; even though the movie is 96 minutes it felt longer.

It’s sort of like a film version of a demolition derby and has you wondering what carnage will happen next so despite any flaws it still makes for a fun ride.

I have always loved my movie barfights and Action USA has a rather epic one; I was reading that it was filmed at The Melody Ranch, in Waco Texas and it’s still in operation to this day and still looks much the same as it does in the movie. The entire bar just erupts into a massive brawl and is arguably my favourite scene of the entire movie.

I remember Gregory Scott Cummins from Desert Heart AKA Inferno as well as several other roles and he has an immediate presence on screen due to his steely eyes. He’s a sympathetic hero in this and wants to do his duty even when Carmen starts coming on to him; dammit woman, let the man do his job!

Ross Hagen eats up the screen as the badass Drago who is on the hunt for Carmen while also working with two other henchmen to track her down. They have some funny banter keeping the tone light and breezy.

There are some fun one-liners and everyone looks like they are having a good time so it’s easy to just get swept up in it.

Overall, Action USA is pure 80’s action excess that demands beer and pizza so you can fully appreciate the spectacle of stunts and sheer zaniness on display. Any movie that has a car jumping over a school bus while children scream and cry below it is a must-see!