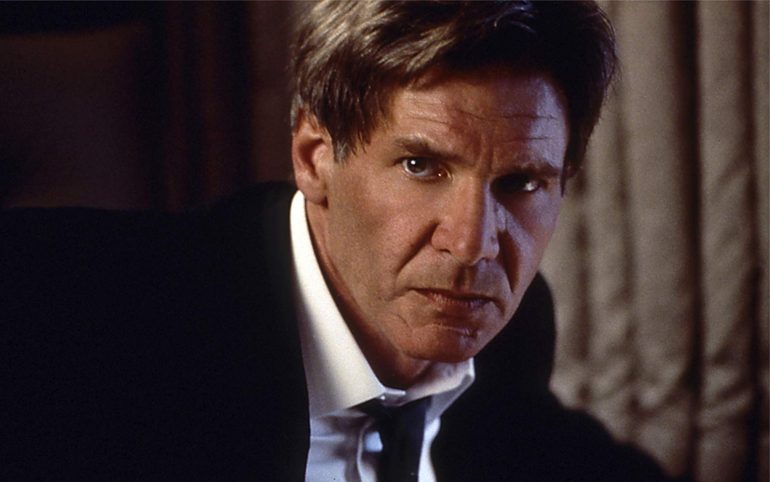 Plot: After making a speech in Moscow vowing to never negotiate with terrorists, President James Marshall (Harrison Ford) boards Air Force One with his family (Wendy Crewson, Liesel Matthews) and advisers. When a group of terrorists led by Ivan Korshunov (Gary Oldman) hijacks the flight, the President’s principles are put to the test. Feigning escape, ex-solider Marshall stows away in the aircraft and must race against time to rescue his family and everyone else on board.

I just realized I have never done a review for the Harrison Ford classic Air Force One so today seems like a good day for a retrospective and to salute one of the best damn imaginary Presidents of the US of A!

Let’s be honest Harrison Ford has never really had much range as an actor but when you’ve played Indiana Jones, Deckard and Han Solo then I guess it doesn’t matter. The fact that he’s Harrison Ford means we love him anyway no matter the role as he brings that everyman charm so when you think about it he really was ideal to play the President in Air Force One. Although you are always aware it’s Harrison Ford being Harrison Ford his POTUS James Marshall is what we all wish would happen in real life –  a President who is a family man and an incorruptible badass action hero.

Air Force One was always preposterous stuff but that’s why it’s so awesome; the biggest asset is Gary Oldman who chews the scenery as the villain Ivan Korshunov. He is one of those pesky Commies who holds Air Force One hostage so his buddy General Alexander Radek (Jurgen Prochnow) will be freed from prison… but the President has other plans.

This is one of my favourite roles of Oldman’s as he is frankly utterly terrifying and wonderfully ruthless. He kills without remorse and is so hateful you will throw things at the screen swearing at him. He is what makes the movie so intense and it really has you on the edge of your seat. “I will execute a hostage every half an hour” is something we quote on a regular basis especially when waiting in line for the bathroom which usually clears the way pretty quick.

Anyway, James Marshall is such an idealized character that he isn’t especially believable but we still root for him 100% of the way; his heroism is only exacerbated by the epic score by Jerry Goldsmith who could do this type of music with his eyes closed.  It’s so damn patriotic that I want to wave an American flag and I’m not even American.

Air Force One wastes no time in getting going and once the hostages are taken it’s a genuine race against time as the President tries to save his family and the rest of the crew.

As we all know sadly this film was let down by some of the worst CG of all time; even when it was released it was laughably bad and took you out of the finale which admittedly goes on for too long anyway. I never bought that Xander Berkeley’s traitorous character Agent Gibbs would continue on after all his allies had been taken out by the President so for me it definitely falls apart in the last act.

Up until that point however, Air Force One is an efficient action thriller with plenty of tension, exciting set-pieces and one of the best villains of the 90’s. Get off my plane!