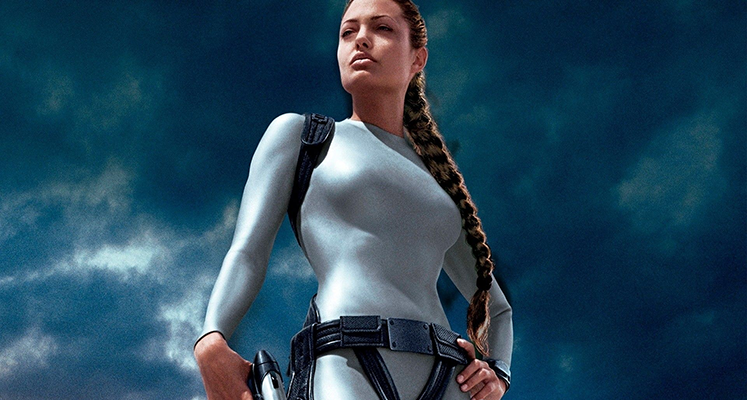 Angelina Jolie’s Tomb Raider films were generally met with middling reviews when they first came out; I remember not being overly enamored with them myself at the time but after watching them recently I forgot just how entertaining they were. So today I wanted to do a little retrospective on both movies.

Plot: Lara Croft, an adventurer, embarks on a journey to find an artefact that possesses the ability to control time. A secret society wants to lay its hands on the relic for its own immoral purposes.

In this first movie not only do we get Angelina at her absolute sexiest but we also see a young Daniel Craig as her roguish “friend” Alex West as well as Ian Glen (Game of Thrones) as the villain Powell. What’s funny is that I never really hated Powell; Glen plays him as a smug, slimy scoundrel and yet I still took to him mostly due to Glen’s sheer on-screen charisma.

Daniel Craig is playing an American and does a decent enough accent although I think he has certainly grown as an actor over the years.

Angelina just looks like she is having a blast as Lara literally laughing when faced with danger and she really was great in this role. She gets the accent spot on and looks to be doing a lot of her own stunts (of which there are many).

There are some spectacular action scenes but the standout for me has to be the assault on Croft Mansion while Lara is using the bungee cord swing to run around the room taking out her various assailants. The camera work is smooth, and we can see everything clearly making for a hugely entertaining set-piece. I was never a big fan of the scene where the statues come alive as I prefer to keep it grounded but the effects for the most part still hold up well and these sorts of things happened in the games too.

My favourite aspect of Tomb Raider is the music score composed by Graeme Revell which is filled with New Age chants and sounds more like an Enigma album with a few action cues added in.

The film is just over 90 minutes long so it moves at a brisk pace and director Simon West is no stranger to action movies so it all still looks great. Some of the dialogue is a little lame and the script could be better but as this is a videogame adaptation it’s still huge fun and one of the better ones.

Having Jolie’s real-life father Jon Voight in this movie was a nice touch and added some heart to a movie that otherwise would leave you feeling rather cold.

Overall, Lara Croft: Tomb Raider has Angelina at her best with some well put together action scenes, a great cast and a fantastic music score. The movie has its flaws but if you’re looking for a 90-minute escape from reality you could do a lot worse.

Plot: Lara Croft races against time to locate the legendary Pandora’s box before it falls in the hands of the evil Jonathan Reiss, who plans to use the box to make weapons of mass destruction.

Jan De Bont takes over directing duties for Tomb Raider: The Cradle of Life and once again we are given some incredible stuntwork and impressive set-pieces; one of the many highlights is when Lara Croft (Angelina Jolie) and Terry Sheridan (Gerard Butler) have to free fly off a Hong Kong skyscraper. While watching some of the behind the scenes footage on the DVD we discover that Jan De Bont was actually scared of heights and was really freaking out being up that high.

Gerard Butler also wasn’t a big fan of hanging upside down for nearly two days as they filmed another scene with him and Jolie escaping from a cave and going down ropes headfirst while firing guns. Butler would have been quite happy for the stunt people to do it instead but as Jolie wanted to do as much of her own stunts as possible, he felt he kind of had to. He may not have enjoyed filming it, but it certainly looks good and is a thrilling action sequence.

Alan Silvestri is on scoring duties and provides a wonderfully memorable theme tune that haunts you for days after watching; it may be a little repetitive but it helps create the spirit of adventure and it is a very different sound for Silvestri who is normally immediately recognisable.

Like the first movie we are transported to various international locations like Greece, Hong Kong and Africa although I would have liked to see more tomb raiding.

It’s funny when watching it the other day I had never noticed how the opening scene is very similar to Raiders of the Lost Ark where we have our hero (Lara Croft) about to rescue an artifact but it is then taken away by the villains. Speaking of which one of said villains is Simon Yam which I only realised on this viewing.

Cradle of Life feels like it has a bit more of a Hong Kong influence where not only was it shot there, but we get double gunplay and slow mo in some of the action scenes which added extra style. It’s too bad Simon Yam doesn’t have a bigger role but he does have a great fight scene with Jolie at one point.

The big bad is played by the always watchable Ciarán Hinds who (in a piece of spectacularly bad timing) creates viruses for the highest bidder… probably didn’t need that storyline at the moment but whatever. He wants to find Pandora’s Box so he can utilize its power so it’s up to Lady Croft to stop him. It’s interesting that Game of Thrones would end up having the two main villains from these films in their series years later; maybe Benioff and Weiss were big Tomb Raider fans…

There is an impressive supporting cast too that includes the always watchable Djimon Hounsou and Til Schweiger in evil henchman mode.

There is less humour this time around which works in the movie’s favour as I thought the script was better and I enjoyed the banter between Butler and Jolie. Pandora’s Box made for a fun McGuffin too but a part of me wanted Lara to open it at the end just to see what would happen.

Angelina doesn’t smile as much in this one and you wonder if she maybe wasn’t having as much fun but she still makes Lara an appealing character.

There is an alternate ending on the DVD where Terry Sheridan dies a more heroic death which I preferred; I didn’t like that his greed took over at the end of the theatrical version but I guess it worked better dramatically.

Overall, Tomb Raider: The Cradle of Life is another fun entry for Angelina Jolie’s Lara Croft; it’s too bad we never got a third movie with her as it would have been nice to have a trilogy. Jolie and Butler made for a great duo and they had genuine chemistry on screen as you could see from Gerry’s screentest.

So those are my thoughts on Angelina Jolie’s turn as Lara Croft in the Tomb Raider films; although I think the Alicia Vikander film might be better I think I still prefer Jolie in the role as she just brought a playful sexiness to the character which was a lacking a little in the most recent movie. But enough from me – do you like any of the Tomb Raider films? Would you like to see Alicia return?