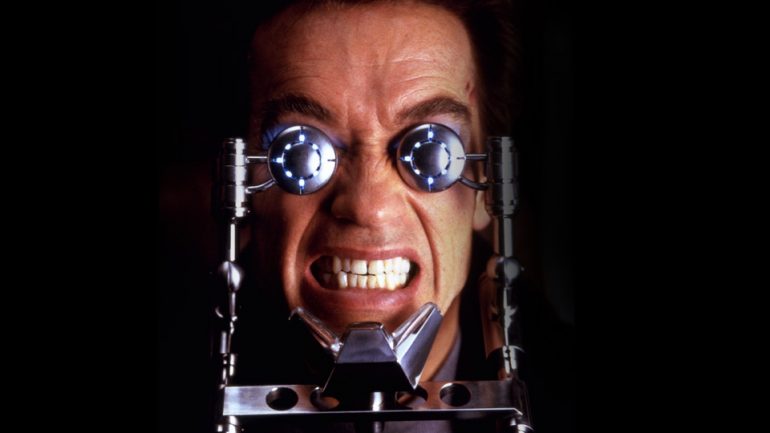 Plot: A world of the very near future in which cattle, fish and even family pet can be cloned. But cloning humans is illegal — that is until family man Adam Gibson (Arnold Schwarzenegger) comes home from work one day to find a clone has replaced him. Taken from his family and plunged into a sinister world he doesn’t understand, Gibson must not only save himself from the assassins who must now destroy him to protect their secret, but uncover who and what is behind the horrible things happening to him.

It’s a rare occasion you could describe an Arnold Schwarzenegger movie as thought provoking but I’ve always considered The 6th Day as one of his more interesting oddities.

It’s certainly not one of his best movies but it explores themes regarding human cloning like do clones have souls, mankind playing God and what it means to be human. It doesn’t really try to answer any of these questions in any great philosophical detail but it does at least have Arnie punch people in the face at regular intervals.

I forgot what a great cast The 6th Day has including Terry Crews, Robert Duvall, Michael Rooker, Michael Rappaport and Tony Goldwyn. Duvall’s Doctor Weir really adds heart to the story and the scenes between him and his terminally ill wife are heart breaking and you can understand why he is such a big advocate for cloning technology; he isn’t a villain but a desperate man who just wants to be with his beloved wife.

Tony Goldwyn on the other hand is the true bad guy Drucker but even then he isn’t a total monster as he is trying to help humans cheat death but he is playing God and seems to have no problem killing anyone who gets in his way… so actually, yeah he is a monster now that I think about it even if I can understand his reasoning (at times).

It’s not the most exciting film and the PG-13 rating means it doesn’t have any graphic violence (boo!) but it does have several impressive set-pieces and most importantly some choice Arnie one-liners like the following:

Adam Gibson: If you really believe that then you should clone yourself while you’re still alive.

Drucker: Why is that? So I can understand your unique perspective?

Adam Gibson: No. So you can go fuck yourself!

It’s a classic Arnie zinger and has me laughing out loud every time. I just love watching Arnold in any movie even if it isn’t all that amazing simply because it’s him and he is always magnetic on screen.

Those dolls creeped me out and were scarier than Chucky or Annabelle combined and I sure as Hell wouldn’t get one for my kid. There is some interesting technology in it but the only one that has really come true so far is the GPS/self-driving car which is very close to it. Why do we not have laser guns yet though? We’ve been promised them in sci-fi movies for the longest time and we still don’t have them in real life.

It’s all silly stuff and the scenes with two Arnie’s is a bit daft but you still go along with it because this is still a Schwarzenegger film and they are usually meant to be ridiculous.

I love Trevor Rabin’s score which has a futuristic atmosphere and Adam’s Theme is one of those tunes that sticks in your head after watching.

Overall, The 6th Day may be a rather forgettable film but it’s a fun watch for the cast, Trevor Rabin’s score and the moral questions it asks about cloning. It’s no Total Recall or Terminator but it’s still a good if unremarkable watch.