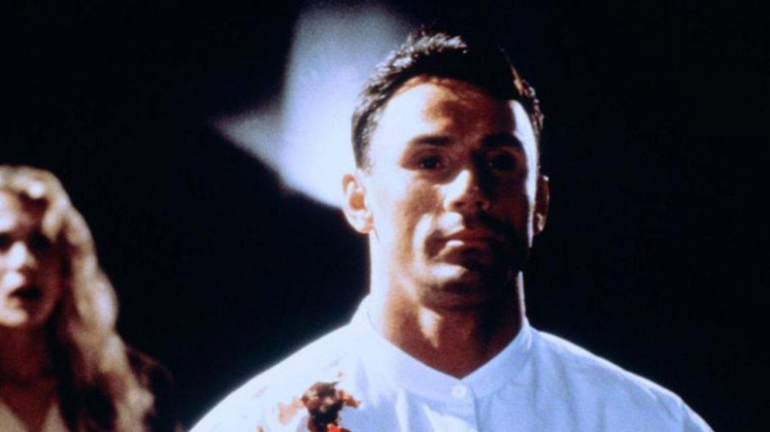 Plot: Robgen industries newest security system is “The J Series Automatic”, an android model designed and programmed to protect humans from violent attacks. But one night, an Automatic named J269 discovers a Robgen executive trying to rape a female employee named Nora Rochester. While trying to stop the crime, he inadvertently kills the executive. At this point, J269 then calls Goddard Marx (his creator and a Robgen chairman) to inform him of the incident. Marx tells the android to stay there with Rochester until help arrives, but Marx is intent on sweeping the fiasco under the rug by sending mercenaries to eliminate both J269 and Rochester. Now the two are fugitives on the run from a para-military hit squad.

I think it must have been in every action star’s contract back in the 80s/90’s that at some point they would have to play a kind of cyborg so Automatic starring Oliver Gruner isn’t especially original but I’ve always enjoyed it due to its fast pacing and regular action scenes.

Gruner makes for a sympathetic hero even when he’s a cyborg or in this case an Automatic known as J269 ; when he sees a female employee about to be raped he goes against his programming and saves her but kills the attacker in the process. His creator Goddard Marx (John Glover) tells them both to stay put but instead of the police he sends a hit team to take out J269 and Nora Rochester; they soon discover that J269 isn’t going down without a fight.

John Glover is so perfectly cast in these kinds of roles where he plays an arrogant millionaire with a God complex who must have his way no matter what; he comes across as friendly and reasonable but he’s the biggest kind of monster who only cares about his wealth and power.

Jeff Kober makes for a hateful villain but he’ll always be the guy from those old Bacardi commercials; in this he plays Smith, a gun for hire who is tasked with taking down J269 but has his work cut out for him.

There are regular fight scenes and awesome shoot-outs throughout Automatic and it’s a quick 86 minutes making it an easy watch; it doesn’t have many memorable lines but the performances are surprisingly strong and I thought Nora (Daphne Ashbrook) was an appealing character. It also has an impressive supporting cast including Penny Johnson Jerald and Troy Evans.

For some reason I never saw that twist coming at the end when I first watched this film so I guess I’m not that bright.

Overall, Automatic is one of Olivier Gruner’s better films with a decent cast, regular impressive action scenes and it moves at a rapid pace making for an entertaining and easy watch.