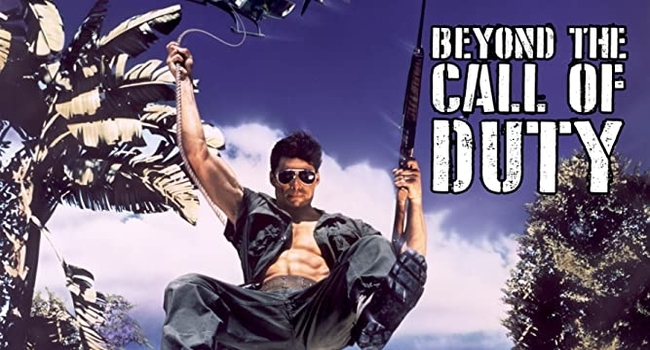 Revisiting Beyond the Call of Duty (1992)

Plot: While leading a maverick band of warriors behind enemy lines, a U.S. Army Commander is forced to lead a beautiful American journalist through the treacherous Mekong River Delta aboard a high speed gun boat while being pursued by a cunning Vietnamese enemy.

Jan-Michael Vincent stars in this Cirio H. Santiago (The Expendables) actioner that feels like a million other movies from that era involving American soldiers behind enemy lines in Vietnam trying to escape in one piece. It takes a little while for us to find out who the lead actually is as we open with a train heist then several different characters are introduced but it still has exploding huts, lots of gunfire and a huge bodycount which ticks all of my boxes; we also have a group of kids the soldiers are trying to bring back to America as they have American fathers. If left behind they will likely be killed so this gives the story a little heart and one of our soldiers even bonds with one of the kids.

What’s interesting is that this movie doesn’t really have an antagonist, just a bunch of nameless extras who get eviscerated by gunfire on a regular basis. The biggest twist (spoiler alert) is that the real villain is in fact Jan-Michael Vincent who isn’t interested in saving the children, but just wants to escape with a crate of gold. His character is kind of a dick anyway so it’s not a major shock but it is the most memorable aspect of the entire film.

Jillian McWhirter was a regular in these kinds of movies back then and I remember her in Rage, Last Man Standing, Stranglehold and more. In this she plays mildly annoying do-gooder reporter Mary Jackson who becomes more sympathetic as we go along and she is the one who convinces the soldiers to take the kids with them.

The movie is pretty much constant gunfire so it’s certainly not boring but there isn’t much in the way of characterization so you don’t care about too many of the cast. There is the odd ropey performance too but it’s better than you’d expect.

Overall, Beyond the Call of Duty is full of explosions and gunfire with nothing especially challenging to it but it’s a passable 90 minutes and the kind of movie we just don’t see anymore.