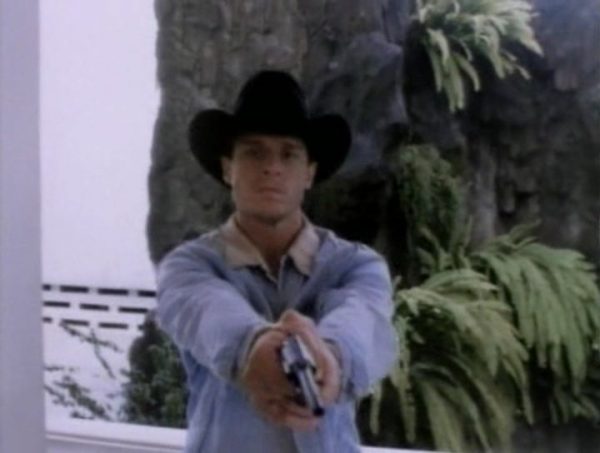 I go into a few spoilers from this movie so if you haven’t seen it then best look elsewhere.

You may have noticed that I am looking back on a lot of older action movies just now but that’s mostly because this year sucks for the genre; there isn’t anything out for a while that I’m particularly interested in so for now we’ll just focus on the golden age of the genre, i.e. before the year 2000.

Anyway, today it’s David Bradley vs. Frank Zagarino in this actioner from 1993; it tells the story of a former Marine’s refusal to join a band of mercenaries that leads to a deadly duel with an old corps comrade.

I always like stories of former friends who become enemies as it seems to add an extra air of tension to proceedings… at least if it well written which this for the most part is not.

This is a B movie from American Ninja director Sam Firstenberg but despite not having a huge budget there is still plenty of fun to be had.

David Bradley plays quite an unsympathetic hero called Wes Healey; he is said Marine who blames himself for the death of his brother a few years prior so he has a bit of a sour face… as you’d imagine. We also know his character is from Texas because he wears a cowboy hat… that never seems to fall off, even during action sequences which is quite a feat.

Maybe it’s because Bradley is in autopilot throughout and never seems all that interested which is understandable as this really isn’t an amazing movie. You never care about Wes and when we find out that his old buddy Keith (Zagarino) faked his death and wants him to join him running a smuggling business he doesn’t even seem particularly surprised.  Naturally he turns down the offer from Keith and the former friends become bitter enemies. It would have been nicer if we’d had a few scenes with these guys when they were friends so when they become rivals it would actually mean something dramatically.

Zagarino is clearly enjoying himself though and easily steals the movie as Keith who is unhinged and seems to really enjoy hitting his sister Karen (Jennifer Campbell)… and kissing her inappropriately. He doesn’t even pretend to be a nice guy so it’s no wonder Wes turns him down. I really felt bad for Karen who has a tough time in his movie; she gets slapped around a lot, electrocuted and generally mistreated so she was the one character I actually cared about.

Despite not having much in the way of great characterization it does at least have some satisfying action and the final 20 minutes has Wes become a one man army as he goes to confront Keith and rescue Karen from her sadistic brother.

What ensues are some shoot-outs and one of the most homoerotic final fight scenes you’ll ever watch as both men seem to miraculously lose their shirts and do battle in a hot and steamy factory.

I love how when anybody gets shot or killed in this movie they mildly groan like they’ve grazed their knee rather than being shot 5 times; that was back when men were men dammit!

Anyway, Blood Brothers is Z grade cheese but it has some fun action scenes and Frank Zagarino on entertaining form as the villain; just a shame Bradley didn’t really try much.