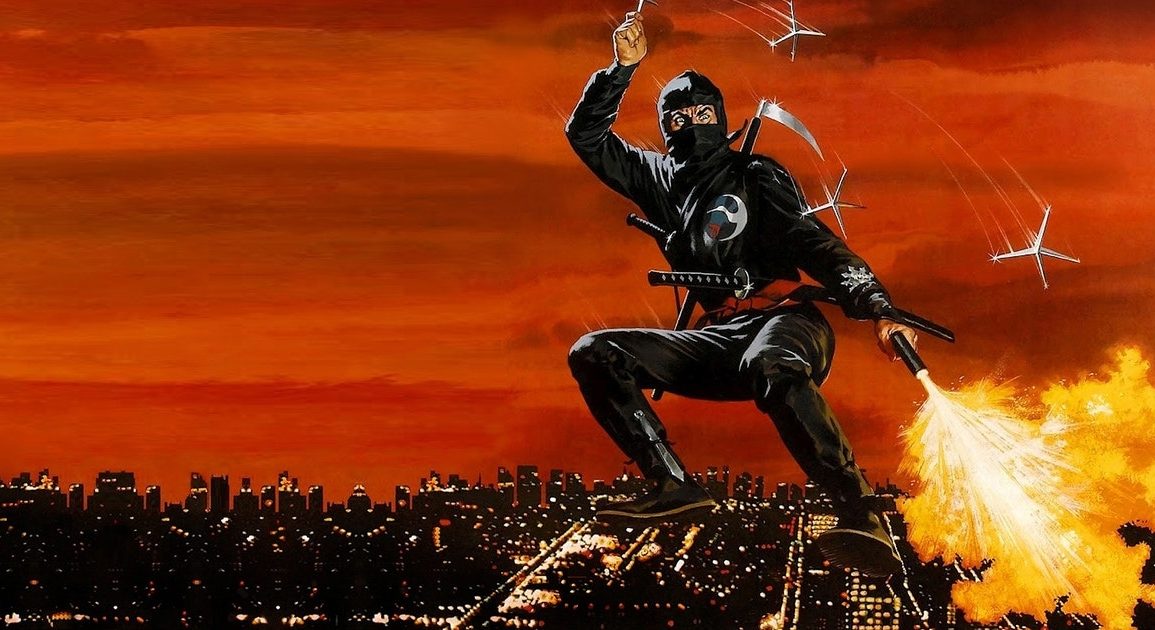 It had been a few years since I watched any of Cannon films classic “ninja” series so during this quarantine period I figured it was time for a revisit and to do a little retrospective on them. So let’s begin; get your nunchucks at the ready.

Plot: After just completing his training at a ninja school, an army vet travels to the Philippines and finds himself battling a land grabber who wants his war-buddy’s property. He must also fight his rival.

Directed by the legendary Menahem Golan Enter the Ninja was the first part of Cannon film’s “Ninja” trilogy and to this day remains one of the most enjoyably bonkers movies you’ll ever see.

The story is familiar enough with a stranger called Cole (Franco Nero) coming to town to see an old friend called Frank (Alex Courtney) but there is an evil land developer who wants to take over his land and his goons are making life difficult for the locals because of it.

Enter the Ninja almost feels like a cartoon brought to life with some hilarious sound effects at times but even the music score (despite having a memorable theme tune) actually goes “Wah wah wahhh” at one point when The Hook (played by Zachi Noy) is humiliated by Cole.

I love Cole’s introduction to Frank’s wife Mary Ann (Susan George) who comes out with a shotgun but clearly isn’t going to use it but just to be sure Cole kicks her in the back and knocks her to the ground. Give her Hell, Cole! After that she ends up becoming attracted to Cole as she apparently enjoys being kicked in the back. Frank is a washed up drunk who has essentially given up on life as he feels like there is no hope against property developer Venarius (Christopher George).

Franco Nero has always been one of the coolest people in cinema and in Enter the Ninja he wears an epic mustache of defiance so it’s no wonder Mary Ann fell for him.

This movie is essentially beyond all criticism; I mean you could say the acting is mostly sub par but who cares? It’s the kind of movie that just makes you smile from beginning to end and that’s what movies should do after all.

Enter the Ninja gives us Sho Kosugi as Cole’s rival ninja Hasegawa who at first resents Cole for coming from America and thinking he can be a ninja just like that. By the end after Cole has defeated Venarius’ goons it’s showdown time between these two rivals; I loved how they are men of honour though and even in death Hasegawa shows respect to his opponent.

There are awesome ninja weapons like nunchucks and shurikens which I’m sure would have got this movie banned as a “Video Nasty” back in the day in the UK.

If you have Amazon Prime you need to watch this movie with subtitles on as it only adds to the entertainment value; at one point the subtitles say “sinister laughter” and “karate yell” which is amazing.

There is no shortage of action with regular fight scenes and a high bodycount although it does lose a point for Cole winking to the camera at the end.

Overall, Enter the Ninja is a Cannon classic that is endlessly enjoyable with Franco Nero proving he was cool no matter how crazy this movie was.

Plot: After his family is killed in Japan by ninjas, Cho and his son Kane come to America to start a new life. He opens a doll shop but is unwittingly importing heroin in the dolls. When he finds out that his friend has betrayed him, Cho must prepare for the ultimate battle he has ever been involved in.

Directed by Sam Firstenberg Revenge of the Ninja was his first directing gig for Cannon films and immediately proved he knew how to shoot action movies.

Where Enter the Ninja had Sho Kosugi as the villain in this sequel (which isn’t really a sequel) he is the protagonist Cho who loses practically everyone close to him except for his son in the brutal opening scene and decides to leave his family home in Japan for a “safer” life in America.

He plans to open an art gallery in the States where he can sell antique dolls and leave his ninja ways behind him forever; fate has other plans however, and his close friend Braden (Arthur Roberts) uses the dolls to smuggle heroin and we discover that he is also trained in the ways of the ninja.

I think this is a far better film than Enter the Ninja as this is still a hugely entertaining and action packed movie without the cartoon sound effects and music. The score is obviously a little dated now but it works for the time period; it was way back in 1983 after all.

Sho Kosugi makes for an immediately sympathetic lead and he certainly has the moves as the fight scenes still hold up today. Smooth camera work and choreography all the way which should always be the case. The real revelation is his son Kane Kosugi who has made a name for himself in his own right as a martial arts star but I would like to see him in more movies as I’ve said before. Kane was around 6 or 7 years old when this movie came out and he was already a skilled martial artist; he could move quickly and hold his own in a satisfying scene where some bullies underestimate their opponent.

Although the subtitles aren’t anywhere near as entertaining this time around we do still get to hear plenty of sinister laughter from Braden who is hilariously over the top at times, especially during the final showdown. How did he manage to create dummies of himself on top of a building?

The finale is still fantastic with the two ninjas facing off against each other in a true battle to the death. There is some great stuntwork too especially during the scene with Cho chasing after some goons in a van and he is being dragged along behind it.

Overall, Revenge of the Ninja is a genuinely entertaining action classic from Cannon with Sam Firstenberg proving an awesome action director. I think this is the best of the trilogy and one I still revisit often.

“Only a ninja can kill a ninja”

Plot: An evil ninja attempts to avenge his death from beyond the grave, by possessing an innocent woman’s body.

I recently picked up the Shout Factory Blu-ray of Ninja III which has been very nicely remastered; there is the occasional grainy moment but generally it looks and sounds better than ever.

Ninja III is (like Revenge of the Ninja) a sequel in name only with Sho Kosugi playing a different character yet again; he really could have just been Cho Osaki once more but instead he is now Yamada, an eye patch wearing ninja who is the only one that can stop an evil ninja who has possessed a girl called Christie (Lucinda Dickey).

This is one of the most perfectly 80’s movies you’ll ever see from the hairstyles to the clothing and the music which must be why it is so damn appealing. It has action, horror and Dickey was especially stunning.

I was watching one of the special features which was an interview with Dickey and she talks about how she had no martial arts training beforehand and learned it just for the movie; she admirably wanted to do as many of her own stunts as possible so she looks the part during the action scenes.

There are some truly surreal moments but the highlight has to be the possession sequence featuring James Hong; you’re not sure whether to laugh or be creeped out but it’s a scene that always sticks with me. The most haunting thing about this movie is Billy’s body hair; he looks like bloody Chewbacca but he’s a man dammit and doesn’t need none of your manscaping nonsense.

Am I the only person who thinks Christie had a really awesome apartment? It has some interesting set design and makes me think that I need more neon in my apartment.

Also aren’t ninjas meant to be like, stealthy? In these movies they come out in broad daylight and then laugh manically while fighting which totally defeats the purpose of being a ninja.

Overall, Ninja III: The Domination is the craziest entry in the series but I can’t help but love it with it’s bizarre mixture of horror, fantasy and action.

So that’s the Ninja trilogy from Cannon Films; the perfect blend of ninja weapons, awesome set-pieces and Sho Kosugi at his badass best.