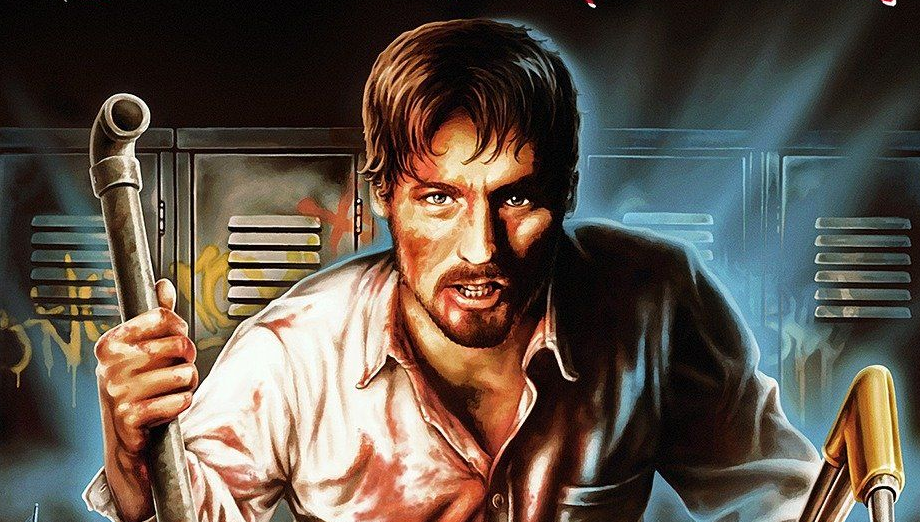 Plot: A new teacher at a troubled inner-city high school soon ends up clashing with the delinquent leader of a punk posse that runs the school.

Class of 1984 starts with our protagonist and all-round nice guy Andrew Norris (Perry King) arriving as the new music teacher at the troubled Lincoln High School. He is met by fellow teacher Terry Corrigan (Roddy McDowell) who warns him that this isn’t like any school he’s been to before. They witness security guards standing next to metal detectors and some rather dangerous students carrying various weapons. Corrigan himself carries a gun (and is a borderline alcoholic) so this is not somewhere you want to send your kids.

Interestingly Mark L. Lester said the film was inspired by several true stories of school violence he had read about in papers including a story of a teacher who brought a gun to class to control his students.

Norris arrives at his music class and a gang is already there bullying the students (one of the class is a young Michael J. Fox) but it doesn’t take long for Norris to chase them out. This begins what will become a war for supremacy for the school halls which will eventually lead to bloodshed.

Movies like Class of 1984 are not good for my blood pressure; I find myself getting a little too over-involved with the plot and shouting expletives at the television.

Timothy Van Patten is unbelievably hateful as the main villain and leader of his gang Peter Stegman; what’s interesting about him is that he is a musical genius but his psychotic nature prevents him from ever becoming anything other than a thug. I HATE Stegman; he and his friends are monsters, and that final half hour gets so intense I can barely sit through it. The rape scene of Norris’ wife remains as shocking as ever and once we reach that stage, we know that Stegman and his cronies have gone too far and they need to be exterminated.

I was reading on IMDb that this was Helena Quinton’s first and only film. She was so upset about being pressured into stripping totally naked in a room full of people for the scene where the punk kids want to inspect her body when she auditions for being a hooker, that she quit acting.

Perry King was perfectly cast as Norris coming across as a good man pushed too far when the system will do nothing and he is forced to fight back.

Some may see it as over the top although that is what makes it so entertaining; it almost feels like a post-apocalyptic film due to the sheer chaotic atmosphere throughout. The school system has lost all control over its students and the police force that have their hands tied because the people they are dealing with are still seen as kids.

There are some satisfying kills especially in the final showdown so by the time it’s all over you’ll likely feel as wrung out as I do.

There were a lot of similar movies that came out after this like the two sci-fi themed sequels Class of 1999 Part 1 and 2 (Lester would direct part 2), The Substitute franchise, Dangerous Minds, The Principal and more; they all manage to be entertaining in their own way but Class of 1984 is one of my favourites.

Class of 1984 was filmed here in Toronto and there was a scene where Norris and his wife are walking along the lakeshore and I could swear it’s just down from where I live.

Overall, Class of 1984 is an intense ride that may seem a little too gruelling for some tastes but I feel like nothing in it is outwith the realms of possibility and it has such a profoundly satisfying ending that it’s worth sitting through the really tough scenes.