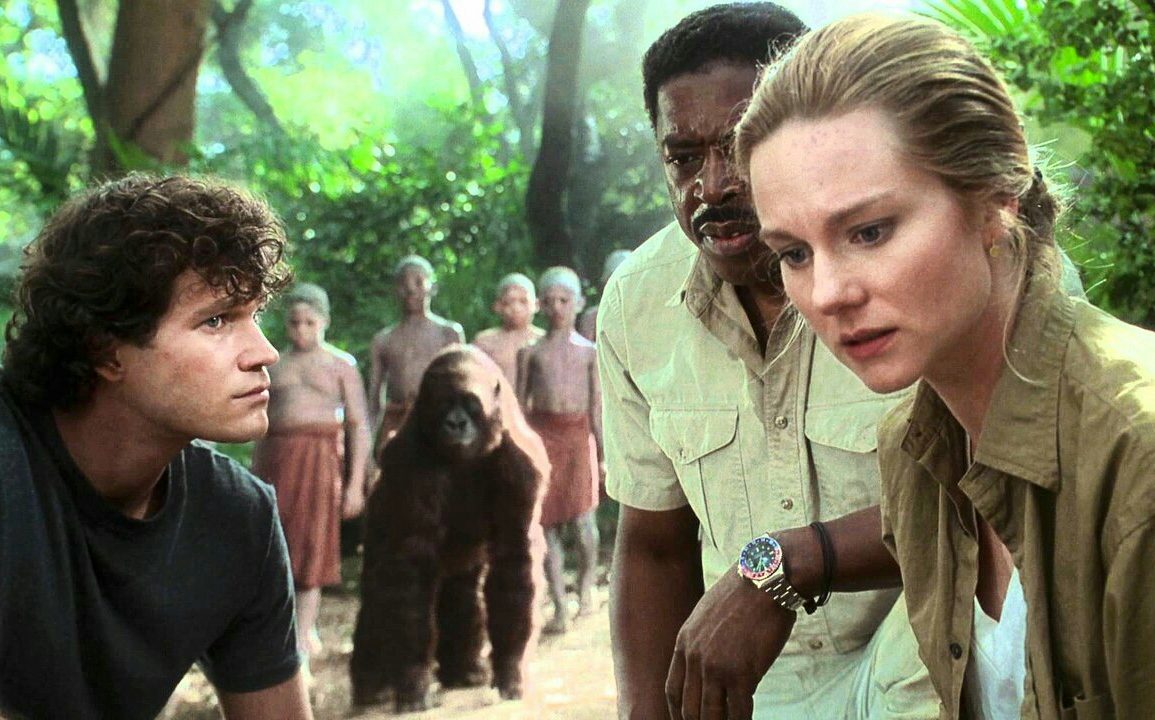 Plot: When an expedition to the African Congo ends in disaster, a new team is assembled to find out what went wrong.

I have a soft spot for this movie mostly because I love adventure tales like Indiana Jones or King Solomon’s Mines. Congo is incredibly silly but still a lot of fun with a cast that includes Bruce Campbell (sadly underused in a glorified cameo), Laura Linney, Dylan Walsh, Ernie Hudson, Delroy Lindo, Joe Pantoliano and the amazing Tim Curry. I could write an article just about how much I love his character name in this movie – Herkermer Homolka which makes me smile any time it is mentioned. Curry is playing a Romanian adventurer and just hams it up wonderfully as only he could.

Laura Linney is tough as nails Dr. Karen Ross but she has to be because she has to put up with a psychopath of a boss in Joe Don Baker who is truly maniacal in this film. I wish I could say his character was unbelievable but I have literally worked with people like that. Anyway, Dr. Ross is tasked with going to the Congo to find out what happened to her ex-fiancée but really her boss just wants her to find a diamond which is rumoured to be in that area. Their entire crew was attacked in the opening scene so Ross wants to find out what happened. She tags along with Dylan Walsh’s character Dr. Peter Elliot (who is a bit of a wet blanket and not remotely interesting) who is there to bring his pet gorilla Amy back to her homeland. They are joined by Herkermer Homolka and a new crew to find out what happened but Homolka of course has his own motivations for being there.

The way the gorillas are done in this movie still looks convincing and we have Stan Winston’s Creature Shop to thank for that as Amy’s face is animatronics but the rest is all people in Gorilla suits. Amy talking with the robotic voice thing is a bit lame and I’d be lying if I said this was a great movie but it’s such a wonderful escape from reality. There are explosions and a few shoot-outs as well as a showdown with some killer gorillas at the end.

You can never go wrong with Ernie Hudson who is arguably my favourite character (after Homolka obviously) Captain Monroe Kelly. He leads the expedition and is the right man for the job, knowing how to react when things go wrong (which they do regularly).

I thought the sequence when the hippo attacks them was entertaining as this was the first time I had ever found out that hippos were dangerous as I just thought they were fat and stupid growing up… ends up it was me who was stupid.

Jerry Goldsmith is on scoring duties and I recognized him from the first few cues as his style is always immediately identifiable. The music is filled with African chants and a memorable theme which is still going through my head as I write this.

Overall, Congo may be a load of nonsense but it’s such harmless fun that it’s hard not to get swept up in the adventure and just enjoy it. I could watch films like this all day and I wish we got more of them nowadays. It also has a character called Herkermer Homolka; how can you not love that?