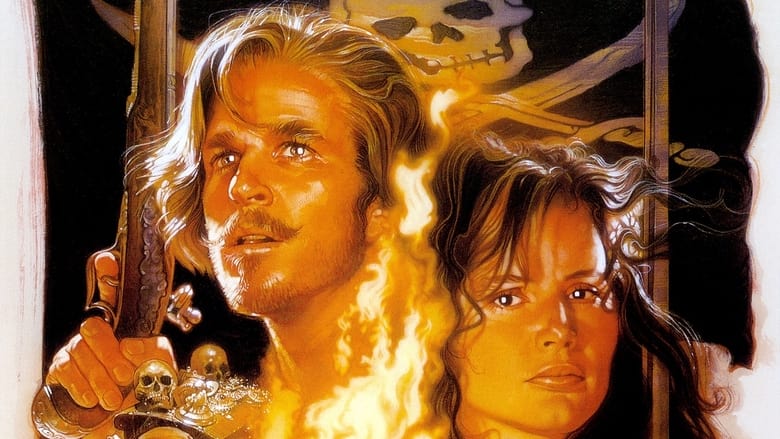 Plot: Feisty Morgan Adams (Geena Davis) inherits her late buccaneer father’s galleon and one-third of a map to buried treasure located on Cutthroat Island. The map had been tattooed on her father’s scalp, and to find the treasure, she must locate and scalp his two brothers. But Morgan’s swashbuckling uncle, Dawg Brown (Frank Langella), wants the treasure for himself, and does battle with his headstrong niece and her unwilling accomplice, Latin-speaking physician William Shaw (Matthew Modine).

I am currently reading a book called Fiasco: A History of Hollywood’s Iconic Flops which goes into some of Tinseltown’s biggest financial failures. One of said movies is of course Cutthroat Island which to this day remains a cautionary tale of excess and is one of the biggest financial disasters of all time. It even helped put Carolco Pictures out of business before the film was even released (however, director Renny Harlin has stated since that they were in trouble before the film even started shooting).

Believe it or not up until recently I had never watched it; there was so much negativity surrounding it that I just never bothered with it. I think there was a mean-spiritedness from critics at the time who enjoyed seeing a big movie fail like this did but then I find even on this site if I give something a negative review it gets far more traction than a positive one; people just like negativity, I guess…

In the aforementioned book author James Robert Parish discusses that the film’s failure is entertainment and it’s hard not to ponder what could have been. Initially Michael Douglas was involved with the picture but would eventually drop out and be replaced by Matthew Modine who didn’t quite have the same star power. I highly recommend reading the book to get the inside story of how it all went wrong but for now I want to actually look at the film itself rather than the story behind it.

Recently I’ve been hearing from people that Cutthroat Island is underrated so it got me curious and figured it was finally time to climb aboard and see if the negativity towards it was justified.

In short, no I actually really enjoyed this movie right from the opening credits mostly due to John Debney’s superlative swashbuckling score. It’s big and bombastic working perfectly with a movie such as this creating a wonderful sense of adventure. It’s almost got me in the mood to give the Pirates of the Caribbean movies another chance but probably not…

I (like most men of my vintage) was in love with Geena Davis back in the day; she was beautiful and strong making her an appealing lead who also did her own stunts. That’s what I enjoyed about this movie so much were the action scenes. There are swordfights, fistfights and some of the best explosions you’ll ever see on screen along with some incredible stuntwork throughout. That’s no surprise considering Vic Armstrong was behind the stunts and you’ll notice in the end credits one Jesse Johnson also worked on them. The final set piece between the two ships is pure spectacle where you can see every penny of the budget on screen.

There are of course some wonky accents (especially Matthew Modine who sometimes sounds English and others when he doesn’t) and clunky dialogue but that’s part of the fun. Frank Langella chews so much scenery as the villain Dawg Brown I’m surprised there was any left especially when he growls for no reason during the final battle. He apparently loved playing the character and he looks to be enjoying himself even if no one else was during filming.

This was back in the good old days of ridiculously over the top bad guy deaths which we really need to get back to, but this scene was gold:

The best piece of trivia you’ll ever read about this film was that Oliver Reed was originally cast as Mordechai Fingers but was fired after getting in a bar fight and mooning at Geena Davis. Man, I’d have paid to see that… In an interview since Matthew Modine has said: “I’d heard these stories about Oliver Reed I think it is all bunk. Oliver was a gentleman. Sure, he had a reputation as a man who enjoyed a drink. But only off set. His reputation as an actor is stellar. Professional. I stand by that. God rest his soul.”

Overall, Cutthroat Island is well paced and such an entertaining escape from reality that I was shocked how much I enjoyed it. A few people have held their heads above the parapet over the past few years to say that Cutthroat Island deserves to be reevaluated and I’d agree.