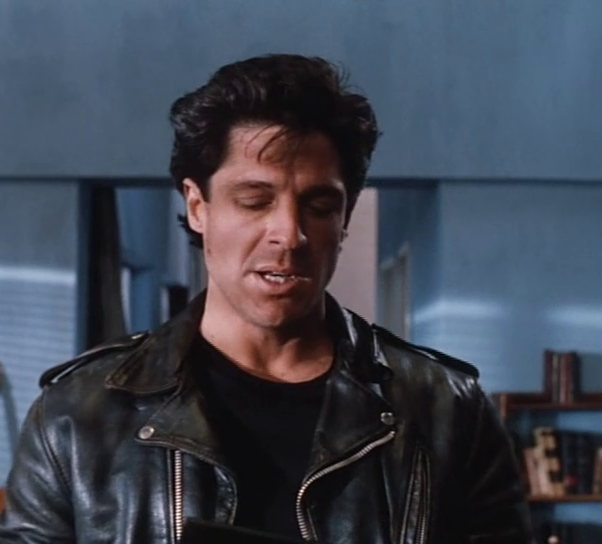 If ever there’s a misleading film title it’s Cyborg Cop; at no point during these two movies does the lead (David Bradley) become a Cyborg Cop.

In the first movie Jack (Bradley) is an Ex-cop who receives an emergency call from his brother Philip. He needs him to go to St. Keith Island in the Caribbean where a wealthy mad scientist is transforming men into killer cyborgs and selling them on the black market. I hate when that happens. Anyway, unknown to Jack, the scientist has already operated on his brother, changing Philip’s torso and right arm into mechanically assisted bulletproof steel, making him another killing machine.

So maybe if you called it “Cyborg & Ex-Cop” then maybe the title would make sense but as it stands I cry “bollocks” to that.

The mad scientist in the first entry is played by John Rhys Davies sporting a bizarre what can only be described as a Yorkshire accent for no reason whatsoever which succeeds in making him one of the least threatening villains of all time.

What this movie has going for it though is the action; there are explosions galore and several fight scenes with Bradley doing what he does best: kicking ass. It also has some decent violence with various body parts bring removed in swift and brutal fashion.

The second movie has Bradley returning… but he’s still not a cyborg; this time he helps an anti-terrorist (Jill Pierce) combat a cyborg (Morgan Hunter) out to destroy the human race. This is only really entertaining if you’re nearly passed out drunk… but then so are most things. Morgan Hunter’s cyborg is a pretty forgettable villain and the story is basically a rip off of Universal Soldier, Terminator and every other movie of that ilk.

There are a few fun action scenes and Bradley beats up a few cyborgs but it’s still not particularly good. The third movie I won’t even talk about as it isn’t even related to the first two.

So if you haven’t seen Cyborg Cop 1 and 2 I’d pound a few beers then sit back and enjoy the absolute nonsense that takes place before you.