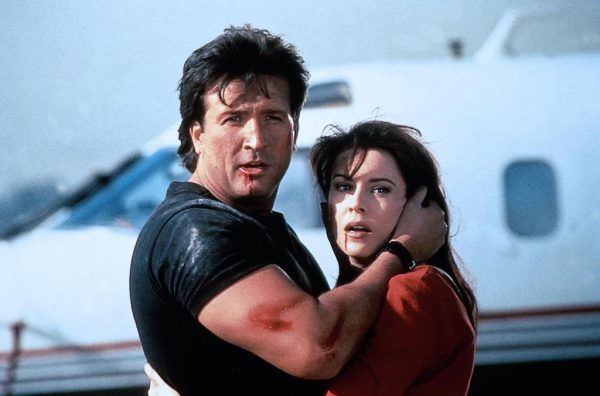 Plot: A terrorist group lead by Colonel Baron has taken over an Israeli biochemical weapon laboratory. Colonel Baron wants to get his hands on a new secret weapon developed by Dr. Allie Levin. Dutton Hatfield from the U.S. embassy must help Dr. Levin keep her invention away from the bad guys.

I remember reviewing this a few years ago and after rewatching it the other day I think I was far too hard on it before; Deadly Takeover (otherwise known as Deadly Outbreak) stars Jeff Speakman in his Die Hard clone which involves terrorists taking over an Israeli biochemical weapon laboratory and it is an absolute blast.

It may not bring anything new to the genre but it is hugely entertaining with Speakman doing his best John McClane impression and Ron Silver on villain duties. Silver could always be very menacing when he was an antagonist and Colonel Baron is a truly hateful, irredeemable monster. I like how at first he meets Sgt. Dutton Hatfield (Speakman) before said deadly takeover and the two men actually get on which I thought was an interesting dynamic. That quickly changes when Dutton finds out that Baron is leading a group of terrorists to steal a bio weapon; Baron’s goons are all every bit as evil as he is with Jack Adalist proving suitably psychotic as the lead henchman Ramos.

The action is slick and we never go more than a few minutes without satisfying beatdowns, explosions or shoot-outs; despite all this Deadly Takeover has quite a light tone and the script is packed with wonderfully corny one-liners like “your party sucks; you’re all out of ice cream and have too many clowns!” which was definitely the highlight.

Rochelle Swanson’s Doctor Allie Levin was mostly useless and a little annoying but she made for a good foil for Dutton. I always thought poor Ira got unfairly disposed of as he was a true hero but it gave it a bit more emotion (but not much). I said previously that Speakman seems like he is just enjoying himself and smiling a bit too much considering the mortal peril they are all meant to be in which I stand by however, he has such a likable onscreen persona that it’s hard not to just enjoy the ride.

The Die Hard clone genre is one of my favourite kinds of action movies as you know exactly what to expect and Deadly Takeover/Deadly Outbreak delivers the goods with non-stop action and just a great sense of escapism.

Overall, Deadly Takeover is far more entertaining than I remember with Speakman proving he had the chops to be a bigger action star than he was; we get regular fight scenes and impressive explosions and Ron Silver at his smug villainous best.