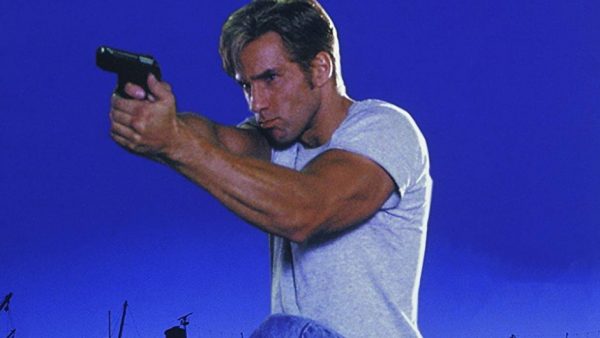 Gary Daniels stars in another PM Entertainment picture and to this day it remains one of my personal favourites. It’s nothing new but as I always say there is something comforting about the familiarity of these movies and Daniels is at his John McClane best here; during his arrival in L.A. he even says “Bloody California” in the airport which is a nod to the opening of Die Hard.

It wastes no time in getting to the action and rather than a car chase (which usually opens PM movies) we get a shoot-out and several fight scenes which shows us straight away we are in for a good time.

Story-wise it’s basically two cops forced to work together to take down an elusive drug lord Chang (Byron Mann) and it’s generally by the numbers even climaxing with a showdown at the docks ; all of this I love as we just sit back and watch our two heroes take out the trash in explosive fashion.

Although Daniels is our main protagonist Ken McLeod makes for an appealing foil in Jim Jenson, the L.A. cop who ends up working with Prince (Daniels) to take down Chang. Jenson even sticks up for Prince when they are being shouted at by the Captain (which is often); Peters (Max Gail) isn’t your average shouty Captain though and is actually reasonable making him seem more human rather than the usual caricature.

In the opening scene when Chang and his henchman are going up to meet his uncle (Aki Aleong) you see a precariously placed vase and statue in the lobby and you just know they won’t be around for the full runtime; it only takes about two minutes before a fight breaks out and as expected both artifacts are in pieces on the floor. I’m sure they were very nice…

The fights were choreographed by Jeff Pruitt and still hold up; there is no shakiness, the camera holds back and we get to see all the action clearly. Both Daniels and McLeod show some great moves and of course we get some awesome stunts, explosions and car chases to make this a fast moving hour and 40 minutes.

The music sounds like it belongs in another movie and hasn’t stood the test of time so well but it does have some electric guitar which is welcome in any action picture.

As cool as Byron Mann is I feel like Chang could have been given greater depth and a little more to do; he was just there to look smug but we didn’t get to see him enough to truly hate his character.

We get some legends doing stunts in this movie too like James Lew and Art Camacho and the supporting cast includes Philip Tan and Paper Tigers star Ron Yuan as the hateful Lucky.

Susan Byun is very trusting as Diana Tang taking in someone she has never met before after he has been attacked by thugs. She nurses him back to health and I like how she isn’t a complete damsel in distress and has a decent showdown at the end against Mei (Lydia Look).

Overall, Deadly Target may be generic stuff but I love every second as it’s packed with fights, shoot-outs, chases and explosions which is everything I live for as we all know.

The full movie is on YouTube (legally) so you can check it out there.