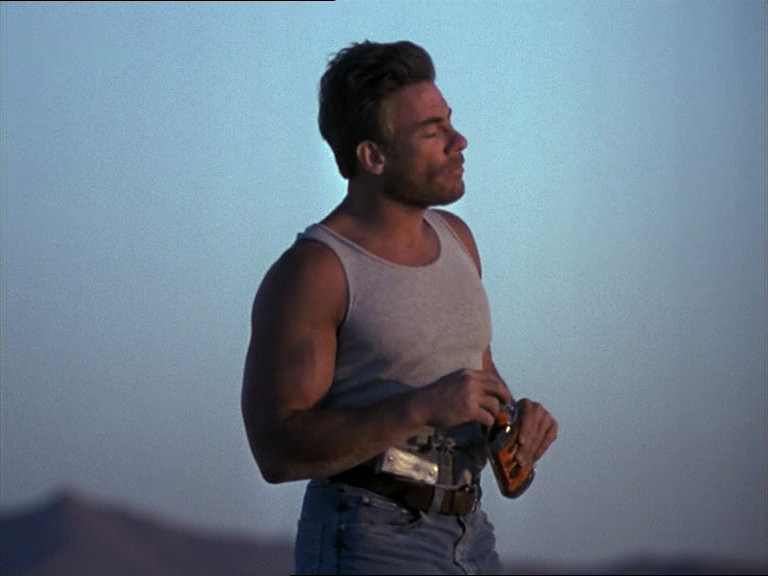 Plot:Veteran Eddie (Jean-Claude Van Damme) is on the verge of a breakdown. Depressed and grappling with a difficult loss, he travels to a desert town on his motorcycle, where he intends to drink himself into a stupor. However, when three brothers steal his motorcycle and try to kill him, his need for vengeance is awakened. With the help of his friends Jubal (Pat Morita) and Johnny Six Toes (Danny Trejo), Eddie dabbles in gang warfare in a bid to regain his motorcycle and his desire to live.

This is a movie which has several names and I think people know it better as Inferno in the USA, but it’s also called Coyote Moon and Desert Heat. On my UK DVD it’s called Desert Heat so we’ll just call it that to avoid any further confusion.

This may be seen as one of Jean-Claude Van Damme’s weaker films but I’ve always had a soft spot for it; for one thing Bill Conti’s score is brilliant and it has one of the best electric guitar theme tunes of all time. It’s great that the score was finally officially released a few months back and it’s a must-have for fans of the movie.

Desert Heat is a rather strange effort with an almost mystical atmosphere as Eddie Lomax (JCVD) is a warrior who has lost his way; Van Damme gives one of his most tortured performances and portrays Eddie as a man going though his own personal Hell. An incident with a few thugs ends with them nearly beating him to death and stealing his motorbike. Nursed back to health by his old friend Johnny Six Toes (Danny Trejo) and also helped by some other locals, Eddie is out for vengeance.

I was always unsure whether Johnny Six Toes was a real person or a guardian angel; upon speaking with Danny Trejo about the movie I can confirm that Johnny Six Toes is in fact a ghost/guardian angel who is basically there to help Eddie find his path again towards redemption. I’m still not sure how he gets kidnapped by the bad guys if he’s a ghost but I think there was a lot of meddling behind the scenes. Apparently the film was directed by John G. Avildsen, director of Rocky (1976) and The Karate Kid (1984). Due to too much tampering of his work he asked for his name to be removed from the film. His real name appears in the end credits as the director of the film, but he is credited as “Danny Mulroon” on the poster, DVD case and beginning credits of the film.

There is an impressive supporting cast including Pat Morita (Karate Kid) who keeps repeating himself and Darkman villain Larry Drake as the verbally abusive father to the villains who is sadly under utilized.

The bad guys are generally hateful bastards especially David ‘Shark’ Fralick who plays Matt Hogan; he’s pretty much a sadistic cowboy and as soon as he comes on screen you already hate him and he has nothing about him to like.

Most of the characters are one note and poorly written with too much emphasis on unfunny comic relief but despite my better judgement I liked some of the local characters who were quirky and had a naïveté to them that appealed.

It’s all rather messy leaving you rather confused by the end but Desert Heat is a pretty fun revenge movie from JCVD with a decent main performance and one of the best action movie music scores of recent times.