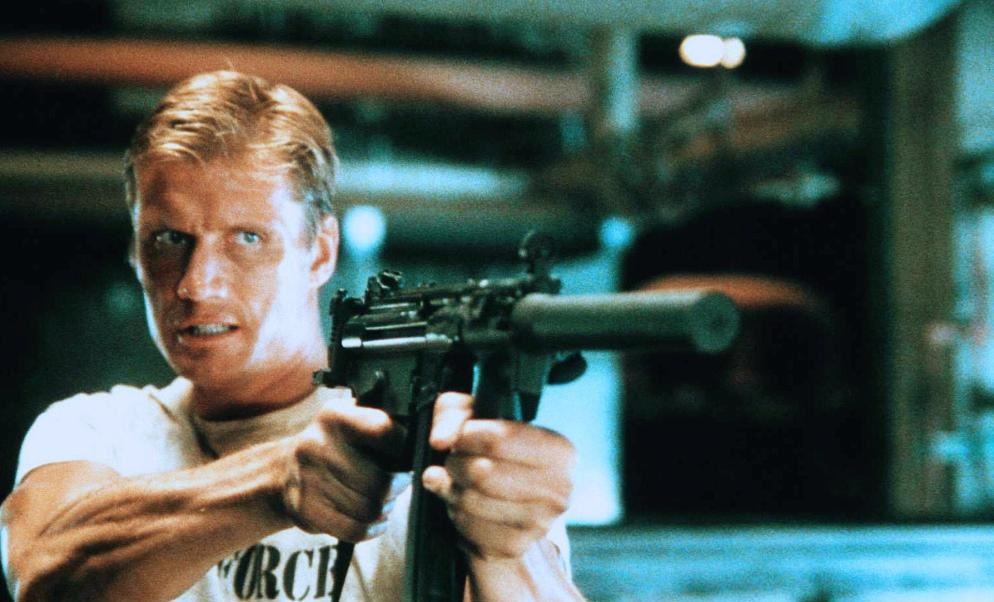 Storm Catcher is one of Dolph Lundgren’s lesser known movies and but it’s still pretty entertaining for what it is.

In the movie Maj. Jack Holloway (Dolph Lundgren) — along with computer specialist Sparks Johnson (Mystro Clark) and co-pilot Lucas (John Pennell) — flies a new type of aircraft known as the Storm Catcher. A soldier steals the aircraft, pinning the blame on Jack, who is arrested and taken to jail for treason. Jack escapes, setting out to prove he’s not a traitor. He soon finds that his daughter has been taken hostage and will be killed if he refuses to detonate a bomb in the White House.

So it sounds like he has a pretty bad day but if anyone can survive it it’s Dolph.

Released in 1999 Storm Catcher manages to remain CG free with plenty of practical explosions and surprisingly decent set-pieces even if it does come across as rather cheap with a made for TV vibe.

The acting from some of the supporting cast is not the best with Jack’s wife coming across as immediately irritating but thankfully she gets stabbed in a short period of time and is no longer an issue. Jack’s friend Sparks is also rather annoying too but he was at least useful in helping to prevent a catastrophe from happening.

The story is all rather predictable with the big “twist” about who the real villain is glaringly obvious from the first 5 minutes of watching.

There aren’t much in the way of fight scenes; it’s mostly shoot-outs but the action highlight is the assault on Jack’s house and he takes out the intruders one by one which was satisfyingly badass. I also liked Jack taking on the fat guy at the airport where Jack kicks him in the balls and he falls on him which was easily the funniest moment of the entire movie.

There is some impressive aerial photography using a real stealth bomber which got me thinking that this is essentially a Dolph Lundgren version of Broken Arrow.

Does anyone else want to call this movie Storm Chaser? I keep having to go through this article to make sure I haven’t written that instead…

Overall, Storm Catcher is a pretty standard Dolph Lundgren vehicle with very little that’s outstanding about it; he is as entertaining as always and there are a few impressive explosions but aside from that it’s rather forgettable.