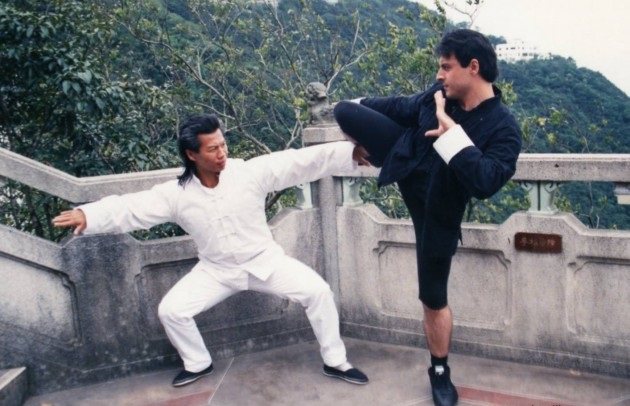 Plot: When his brother overdoses on a new designer drug called nirvana, a fresh MBA graduate must choose between the stable pursuits of marriage and a burgeoning family business, or traveling to Hong Kong to fight drug dealers.

Released the same year as Tiger Claws, Fearless Tiger stars Jalal Merhi as Lyle Camille, a man who has it all, a beautiful girl (Monica Schnarre) he’s about to marry and a job with his father’s company; his world is turned upside down when his brother overdoses on a new drug called Nirvana so Lyle gives up everything and heads to Hong Kong to train and become a better warrior while planning on taking down the drug dealers responsible for his brother’s death.

This is similar to movies like Kickboxer and Bloodsport and doesn’t bring anything new to the genre and yet Fearless Tiger still makes for a fast paced and action-packed 90 minutes. The acting is subpar at best for the most part but as I always say there was something about these straight to VHS movies in the 90’s that are endlessly rewatchable.

Considering this has a modest budget we get a few explosions and a Kumite style tournament featuring various martial artists; you can see everything that’s going on in the fights however, there are several points where scenes are too darkly lit to see what’s happening. During one of the matches a fighter tries using the crane kick (just like in The Karate Kid) but he just gets punched in the face and knocked out immediately which I found hilarious. This may be the first movie that features a climactic fight on a garbage truck so it gets points for trying something new.

Bolo Yeung is only really in an extended cameo known only as Master on Mountain (and he’s bizarrely dubbed) but he helps Lyle achieve his goal of becoming a better fighter so it’s nice to see Bolo not play a villain which he was mostly known for.

The music features some electric guitars and works well for the movie even if there isn’t anything especially memorable about it.

Lazar Rockwood looks more like a heavy metal musician rather than the antagonist Saalamar and he is disposed of a little too quickly at the end but I don’t think we’re meant to take this too seriously so just enjoy the ride.

Interestingly according to IMDB “the U.S. Imperial VHS release and UK Hollywood DVD releases, under the name “Fearless Tiger” have a different version of the film with new scenes, some new dialogue, a completely different score, composed by Varouje, which also includes recycled music from Talons of the Eagle, some scenes out of order, and a completely different climax. The Canadian Cineplex Odeon VHS has the original version (this is only the version I’ve seen).”

Overall, Fearless Tiger isn’t anything new but I’ll watch anything with Jalal Merhi in it so if you like fighting tournament movies and ridiculous looking villains then you’ll enjoy this.