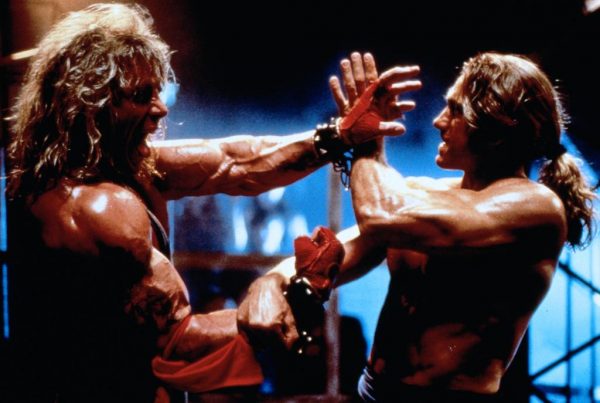 Plot: In the year 2007, crime has risen at an exponential rate. Once highly populated metropolises such as Los Angeles are no longer inhabitable. These cities have transformed into “Hell Zones,” ruled by violent street gangs. The Hell Zone, formerly called the “Zone of Personal Freedom,” is a safe-haven for criminal warpaths everywhere. This Hell Zone in LA is controlled by a criminal mastermind named Drexal (Joseph Ruskin). For the sake of entertaining his crowds of decadent losers and underlings, Drexal has staged a series of lethal, no-holds-barred matches in the “Death Ring,” where the winner takes all of the glory…while the defeated one shall lose his self-respect (or maybe just his head). Meanwhile, two brave cops, Braniff (Chad McQueen), and Sledge (Gary Daniels) must risk their badges…and their lives when they enter Los Angeles’s “Hell Zone.” They must fight for their lives in order to expose an alleged “black market” involving the sale of counterfeit AIDS vaccines. Will these two men triumph against all odds in the Hell Zone alive or will they pay with their lives?

Gary Daniels and Chad McQueen star in PM Entertainment’s Firepower where they play two cops who go undercover in the most dangerous part of town called Hell Zone. They end up fighting for their very lives in the Death Ring, which begs the question, why isn’t this movie called Death Ring? There really isn’t much in the way of firepower so the title is a bit misleading.

Aside from that though the movie is everything you’d want with pretty much constant action from beginning to end; is it just me or did PM Entertainment have the best car chases? Practically every movie of theirs was filled with amazing vehicular carnage, explosions and stunts the like of which we rarely see today. Firepower is no different opening with a chase through the streets as our heroes try to apprehend a criminal. What ensues is action at is finest with some fantastic stunts, shoot-outs and Gary Daniels being a total badass.

McQueen’s character Darren Braniff is a good cop through and through but he is addicted to his job neglecting his wife and constantly putting his own life in danger. Daniels’ character Nick Sledge is the opposite who likes to live life on the edge; he’s cocky and a little too brutal with suspects. This plants the seeds early on that things may not end well for him…

If you’ve never seen Firepower before then don’t read any further as I go into spoilers.

What made this movie stand out to me were final 25 minutes whenever they actually kill off Gary Daniels (by decapitation no less) but the villains also kill Braniff’s wife so he loses nearly everything. Thankfully one of the girl’s at the Death Ring called Lisa (Alisha Das) is on standby to replace her before the end credits. Still, it’s incredibly ballsy to kill off one of the main characters and I didn’t see it coming on the first viewing.

Can we talk about how awesome that diner looks in the opening scene with its gorgeous neon lights? I would go there every night if it were real. There was something about the way these movies looked back then that the lighting gave them an otherworldly style.

Jim Hellwig (AKA Ultimate Warrior who sadly died aged 54) was cast as our main henchman known only as The Swordsman and although he looks rather ridiculous by today’s standards he was huge and made for an intimidating antagonist. He doesn’t say much apart from roaring occasionally but he doesn’t need to and he gets a satisfying showdown with Braniff at the end.

Chad and Gary make for a great duo and have some nice banter; it’s a shame McQueen never went on to become a bigger star as he was a really likeable lead and looked the part in the action scenes. Gary Daniels is one of the best martial artists in movies doing all kinds of different moves so his fight scenes never look samey.

Keep your eyes open for the great Art Camacho who plays the well meaning (but ill-fated) Viper where we get a really good look at his martial arts skills and he could really move as well.

Overall, Firepower is one of my favourite Gary Daniels movies and both he and Chad McQueen make for a great duo; the action still holds up and it’s well paced making it another PM Entertainment gem.