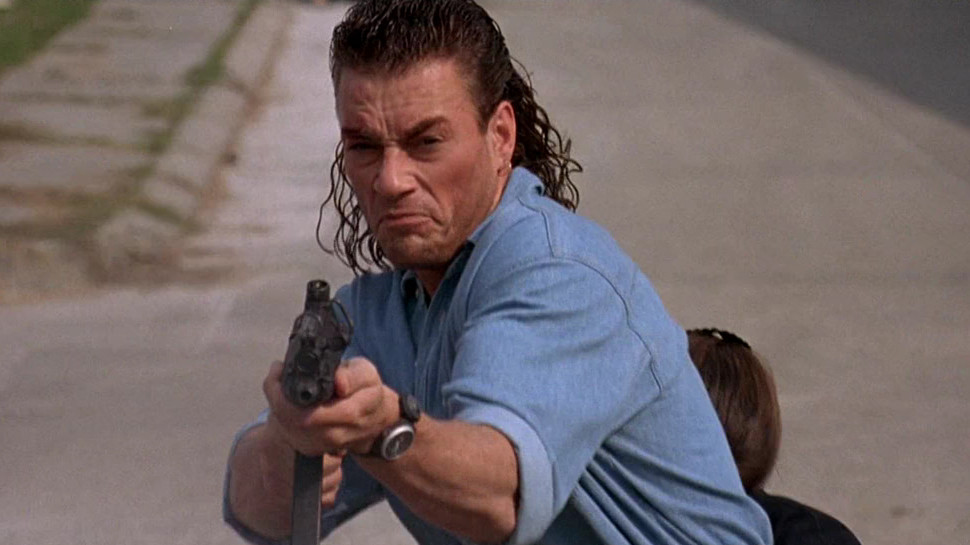 I’ve already reviewed Hard Target and everyone knows it’s pretty much one of my all-time favourite movies so this isn’t another review, more just pointing out what was removed from the movie.

It’s one of the few movies I am so familiar with that I know every line of dialogue. Recently I managed to get my hands on the rare workprint of the film and finally got to see a lot of long lost footage. I’m sure plenty of you out there have seen this at some point but there are a few choice moments that I really wish they’d kept in the final film.

As with every workprint, it has terrible picture quality and the music score is incomplete so we hear music from other films like Aliens, Terminator 2, Die Hard, Universal Soldier and Rambo II.

The dialogue was perfectly audible though and because I’m such a fan of the film, then this was pure gold dust.

I’m not going to go over every little thing that’s different as practically every scene has tweaked dialogue and alternate camera angles but I want to look at some of the things that really stood out.

First let’s look at the good stuff; one scene which I think should have been kept was the love scene between Chance and Nat. Although it would have slowed the pacing down, it provides us some backstory to both characters and makes their relationship more believable. We discover (unsurprisingly) that Chance is an orphan and how he lost his sailor’s license. The pair eventually kiss in a nicely done scene where Nat walks out… then comes back in saying she changed her mind.

As discussed before there are a few extra scenes of violence that were cut but not as many as I expected. I’ve always been more familiar with the UK/European version which didn’t trim too much in terms of blood. I think the one scene which really stood out is the scene of Randal Poe getting his ear cut off with scissors.

In the theatrically released version, the camera cuts way and we simply hear Poe scream but in the workprint you see the scissors cutting right through the ear. It’s kinda awesome but understandable why they cut it as it was always a rather tough scene to watch. I want to put on the record that I always felt bad for Poe; he really goes through a crap time in this movie; getting beat up, cut up and eventually shot in the face with a shotgun.

When I spoke to Lance a few months ago I asked him if there was any footage cut that he regretted; he mentioned a scene where Fouchon is playing the piano and fantasising about hunting in Africa. Although it doesn’t add much to the story, we see this very scene in the workprint and all it demonstrates is that Fouchon lives for the hunt; there is nothing else for him.

There are a few more moments with Pik van Cleef (Arnold Vosloo) where he shows more tracking skills and also a few more jibes between him and Fouchon. I love Vosloo in this movie; Pik is such a sadistic bastard that you really count down until his blood-soaked demise.

Speaking of blood-soaked demises; I’m pretty sure every bad guy is shot about an extra 50 times in this version, with more blood squibs used in one scene than most movies used in their entire run time.

Fouchon’s death scene is different and I actually prefer the theatrical version; in this version he is shot and Van Damme kicks him, and then throws a grenade at him. In the theatrical version Chance drops the grenade down Fouchon’s trousers; Fouchon picks up the grenade thinking he’s put the pin back in and laughs… then it explodes. It just works better dramatically as he dies too quickly in the workprint.

When Chance is given his gun from Duvet, he stares at it and then we get quick flashes of everyone Fouchon and his goons have killed. It’s an interesting moment as it shows that Chance knows what he has to do to stop these men from hurting anyone else.

There are several scenes which definitely deserved to be removed; one between Chance and Duvet dancing and singing when they first see each other was cringe worthy and definitely needed to be left on the editing floor.

There were also a few poor lines of dialogue and of the weakest was from Fouchon (Lance Henriksen) where he says “You guys are as dumb as a bag of hammers”… err OK. So it’s not like everything that was cut NEEDED to stay in the film.

There are a few extra lines from Duvet as well which were rightly edited as he’s not interesting enough a character to warrant more scenes.

The conversation between Nat and her father’s landlady is a little different but really added nothing so it was rightly trimmed too.

I would love to see a complete version of Hard Target with a few of these scenes added back in as they either add more violence (always good) and some more backstory, which also helps. Either way, the workprint is a fun watch and for JCVD fans it’s definitely worth checking out.

Never one to leave ya’ll hanging, the FB page Jean-Claude Van Damme: The Fighter shared this rare video produced for the Los Angeles Times; it shows how movie scenes are shot using various devices that move the camera in interesting ways. It features Jean-Claude Van Damme who had been working on Hard Target at the time.