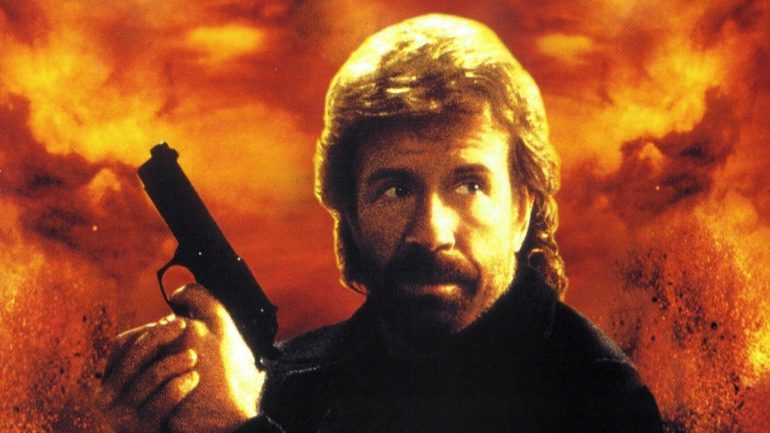 Plot: Shatter and Jackson, 2 Chicago police officers, are investigating the brutal murder of a rabbi and are summoned to Israel for questioning. While they are in Israel they continue their investigation there on some leads they have. After a while they begin to understand that they are trying to catch a supernatural being, and if they don’t do it fast something terrible will happen.

Chuck Norris stars as the amazingly named Chicago cop Frank Shatter who alongside his loud and annoying partner Jackson (Calvin Levels) has to take down a disciple of Satan called Lockley (played by the always reliable Christopher Neame). They fly out to Israel and find out that they are dealing with far more than your average man; Lockley has supernatural abilities making for the toughest opponent Shatter has ever had to face.

From Cannon Pictures Hellbound is one of Chuck’s weaker movies but it is the ultimate guilty pleasure and at 90 minutes it moves quickly enough with plenty of action and some surprisingly icky gore scenes (like hearts being removed).

Christopher Neame (Street Knight) always made for an enjoyable villain and he’s suitably nasty in Hellbound especially when he uses his cool demonic voice; it’s all very silly and the over the top choral music does provide some unintentional mirth. The score is awesome though but it just feels like it should be in another, better movie.

As stated above I found Jackson really annoying after a while as all he does is complain and whine about being hungry; I hate characters like that as there is no reason to care what happens to them. I always hoped he wouldn’t live to see the end credits but sadly he does.

Chuck doesn’t do anything remarkable either but he has a few fight scenes where he gets to take out the trash; the final battle with Lockley is pretty satisfying but generally there isn’t anything all that memorable or exciting about this movie.

It’s not exactly a great commercial for Israel either with old and dirty hotels and kids who steal from tourists so you’re not exactly in a big rush to visit by the time the end credits roll.

Overall, Hellbound isn’t one of Chuck’s better movies but after a few drinks it is diverting enough; there are several fights to keep fans engaged but it’s not a movie I return to often mostly due to Jackson getting on my nerves throughout.