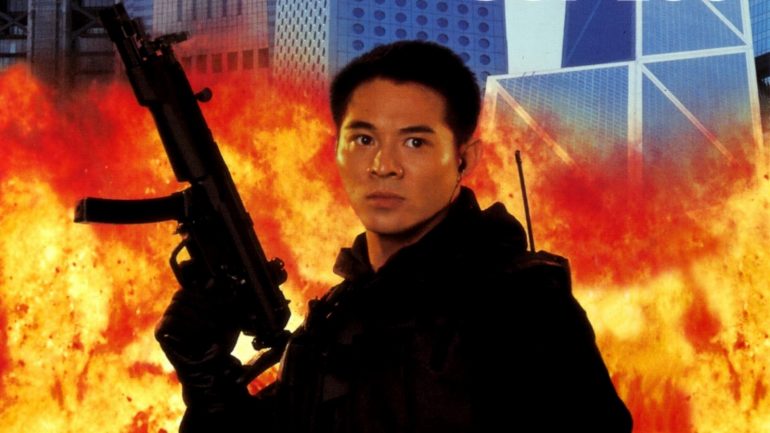 Plot: After failing to save his wife from ‘The Doctor’, Kit Li is working as a bodyguard and secret stunt double for the cowardly martial arts film star Frankie Lane. Frankie attends an exhibition of the crown jewels of Russia at a Hong Kong hotel, and when the Doctor’s gang take over the building in attempt to steal them, Kit is the only thing standing in their way. Will Frankie regain his courage? Will romance blossom between Kit and the nosy reporter?

Jet Li and Jacky Cheung star in this action comedy which is very much a spoof of Hollywood actioners like Die Hard except with a far more goofy sense of humour. It’s no secret that this kind of genre isn’t my bag; I prefer my action movies more serious with maybe a few one-liners but these slapstick type movies I don’t normally like.

Meltdown AKA High Risk just keeps the balance right with Jet Li playing the straight man out for revenge after his wife and son are murdered by a terrorist bomb. Jacky Cheung plays a famous movie star named Frankie who is in fact a coward in real life and it isn’t until he is in a building that gets taken over by terrorists that he comes into his own and finds his courage.

Directed by Wong Jing the action is frenetic with several memorable fight scenes but unfortunately Jet Li is really more of a supporting character with the primary focus on Jackie Cheung’s irritating buffoon. Li still has enough to do though and his fight with Ben Lam in the second half where he electrocutes then impales him on a pole is the most satisfying moment of the entire film.

What surprised me was how amateurish several moments are in the film for example, one scene has two reporters chased by dogs but the barking sounds are clearly added after as the dogs aren’t barking at all nor do they even look fierce. The tone is definitely a little weird too where one moment you have Kit Li’s (Jet Li) family getting blown up followed by Frankie’s silly antics which do tend to take way a lot of the drama.

I found an interesting little tidbit on IMDB about this film which is apparently takes a cinematic swipe at Jackie Chan, with whom director Wong Jing had worked previously on the City Hunter live-action film. After the release of City Hunter, Chan not only disowned the film, but attacked Wong personally in the press. Through the character of Frankie Lone, Wong insinuated that Chan was actually a boozing womanizer and a fraud who did not really do his own stunts after all.

It definitely feels like a Jackie Chan film in its tone although the action would be more spectacular if Jackie was involved, I’m sure. That’s not to say this movie lacks set-pieces as one moment has Jet Li flying a helicopter while shooting the bad guys and then jumping into the building as the helicopter crashes and explodes around them.

I really enjoyed the villains too with Ben Lam playing the henchman who fights Jet Li but Kelvin Wong is suitably mean as The Doctor; he’s no Hans Gruber but he’s still fun to hate. Billy Chow also has several moment to shine as Kong, a henchman who is obsessed with fighting Frankie so needless to say their final showdown doesn’t disappoint either.

Overall, High Risk/Meltdown doesn’t stand up too well to modern scrutinization but when it came out it was a lot of fun with Jet Li proving an awesome action hero. It’s still entertaining and if you’re a Jet Li or Jackie Cheung fan then give it a watch with an open mind.