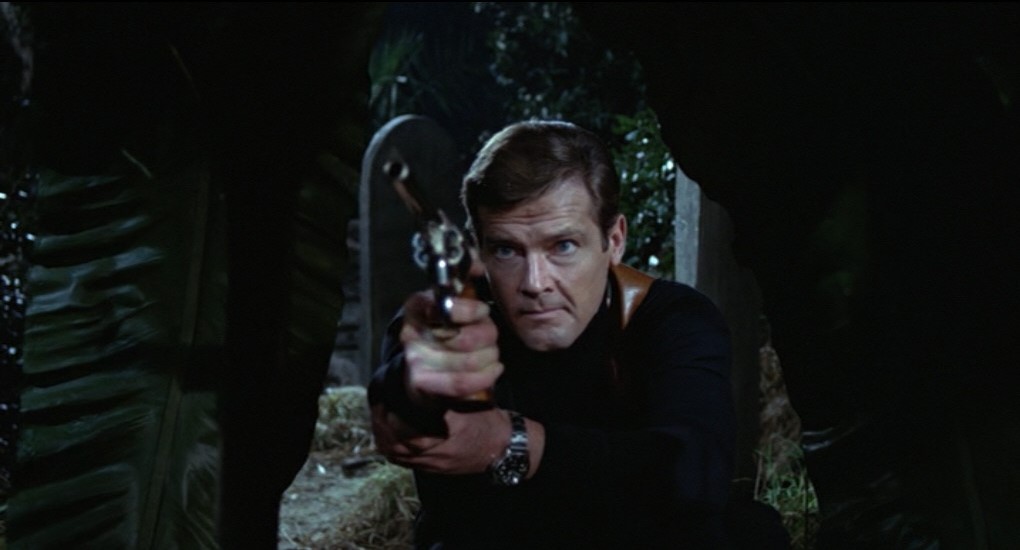 Plot: When Bond (Roger Moore) investigates the murders of three fellow agents, he finds himself a target, evading vicious assassins as he closes in on powerful Kananga (Yaphet Kotto). Known on the streets as Mr. Big, Kananga is coordinating a global threat, using tons of self-produced heroin. As Bond tries to unravel the mastermind’s plan, he meets Solitaire (Jane Seymour), a beautiful tarot-card reader, whose magic is crucial to the crime lord.

To this day Live and Let Die remains the most bizarre James Bond film to date which is why it’s one of my favorites; it still is very much a Bond film with Roger Moore taking over from Sean Connery and making the role his own but it’s also a Blaxploitation movie at the same time.

There are pimptastic cars and outfits with larger than life characters who practically jump off the screen as well as several creepy scenes of voodoo, black magic and sacrifices.

Some of the villains in this movie terrified me as a kid especially Tee Hee with his evil smile and metal claw; he was a pure Bond henchman but Baron Samedi still scares the crap out of me even now.

Interesting tidbit I found on IMDB about Geoffrey Holder who played Samedi. He apparently hated working with snakes but was called upon to handle lots of them. “He was particularly against having to play the scene where his character falls into a coffin full of them. However, he was obligated to perform the scene without raising too much of a complaint, because Princess Alexandra was visiting the set the day the scene was being filmed, and he didn’t want to lose face in front of royalty.”

Yaphet Kotto was more understated than your average Bond villain as he plays the dual roles of Kananga & Mr. Big but by the finale it becomes business as usual as he of course has a lair filled with sharks and then dies one of the most preposterously amazing deaths of all time. I was reading recently that Kotto said he was not allowed to do any press for the film, nor was he allowed to attend the premiere. He said that the producers told him that they were afraid of the public’s reaction to the villain being black.

Moore brings his own wonderful sense of humour to the role but this is grittier than his movies would become and despite having several choice one-liners (“I’m sure we can lick you into shape”) he is more serious than later entries like Moonraker.

The best part of any Bond movies are the action set-pieces and Live and Let Die has one of the all-time greats; a speedboat chase with some of the most jaw dropping stunt work of the series which still stands out today.

I never did like redneck Sheriff Pepper who is a character you wouldn’t get away with today but you really just laugh at him anyway as he is constantly humiliated by his own stupidity.

Paul McCartney & Wings provide the theme song which remains my favourite ever Bond theme; it’s the most exciting to date and any time I hear it I picture a fast moving train and fighting which is exactly what happens in the finale of this movie.

Another interesting side note is that Clint Eastwood was also offered the role of Bond after the success of Dirty Harry but turned it down stating that an Englishman should play Bond.

Jane Seymour is one of the most stunning Bond girls to date as the mysterious Solitaire who has spent her life essentially being manipulated by men due to her “gifts”.

Overall, Live and Let Die is one of the darker and stranger entries in the 007 canon but it remains one of my favourite Roger Moore Bond movies with genuinely scary villains and some classic action scenes.