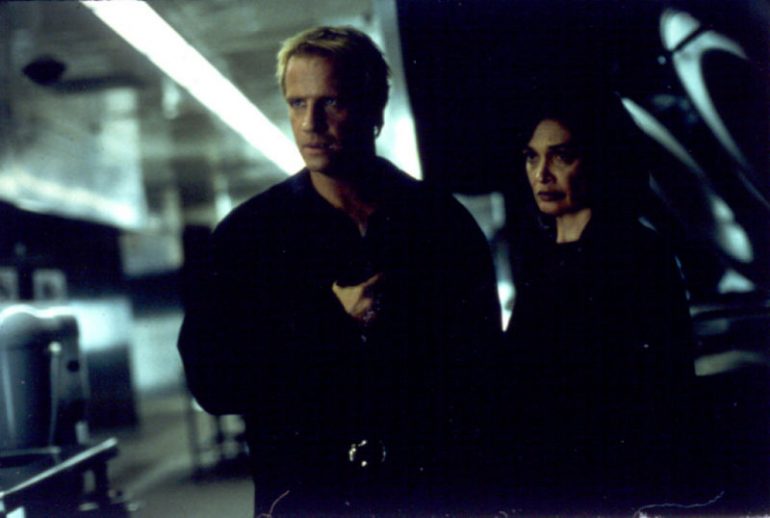 Mean Guns hits 20 years of age this November but I just picked up the DVD a few weeks ago so I’m doing an article now instead as the movie is still fresh in my head.

Albert Pyun has always been one of the more interesting independent filmmakers out there with movies like Cyborg, Nemesis and many more under his belt, he always had an eye for something a little different.

Mean Guns was more of a standard action movie in terms of story but it manages to feel unlike anything you’ve seen before; with it’s bizarre choice of mambo music as the score and a bodycount in the double digits the film remains compellingly odd.

It tells the story of a gangster called Vincent Moon (Ice-T) who has a list of about 100 people who work for an organisation known as The Syndicate and have screwed up at one point or another. Rather than outright killing them, he decides to have a little fun by putting all of them together in a high security prison, unarmed, and dumping bucketfuls of guns, ammo, and baseball bats on them and letting them kill each other. The final three who survive are given a prize of 10 million dollars.

The cast includes Christopher Lambert and Michael Halsey who are part of this group and you are never quite sure who is good or bad. Lambert’s character Lou shows up and is there purely by choice for his own personal reasons. At the start you are convinced that he is going to be the hero because he’s Christopher Lambert but in actual fact it’s really Marcus who seems to be the good guy… or is he?

So it has all kinds of crazy shoot-outs and punch ups with a strange visual style where it almost looks like it’s all a dream sequence. It only adds to the film’s weirdness and that’s the one thing I keep saying any time I watch it: “What an odd film this is”. The music gets a little annoying after a while (sorry, but I hate mambo) and it does take a little while to get going but I really enjoy the build up.

Mean Guns also has a wacky sense of humour; the two guys randomly dancing in the elevator always makes me smile and there are several frankly surreal moments which keeps you watching.

Ice-T is always an entertaining villain and he’s particularly mean (thus the title) in this movie but it’s not really until the final 5 minutes when we see who the survivors will be and who the real heroes and villains are.

It is still a little too long and a few moments probably could have been cut for pacing reasons but after (nearly) 20 years Mean Guns is still an entertaining little oddity which fans of B movie cinema will lap up.