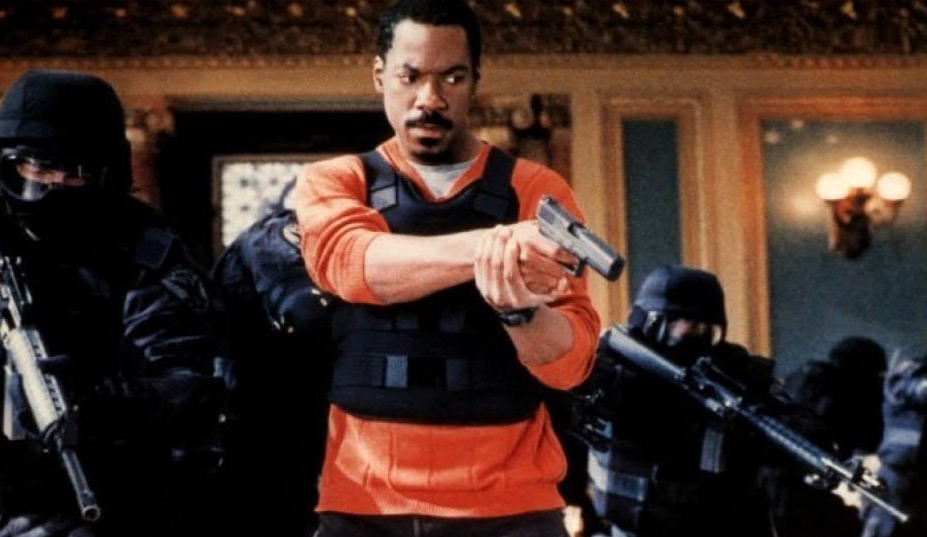 Plot: San Francisco hostage negotiator Scott Roper (Eddie Murphy) is partnered with rookie Kevin McCall (Michael Rapaport). While Scott is trying to win back his girlfriend, Ronnie Tate (Carmen Ejogo), he and Kevin are called in to a jewel store, where psychotic Michael Korda (Michael Wincott) has taken hostages. They manage to capture him — but soon, Michael escapes from jail and kidnaps Ronnie as revenge. Despite officially being taken off the case, Scott and Kevin go after the dangerous criminal.

It had been many years since I last watched Metro and then I saw it gathering dust on my DVD shelf and brought it out of retirement for a watch. I forgot what an enjoyable movie it is; Eddie Murphy brings his usual comedic schtick at times, but this is generally a more serious action picture but that’s because it was initially written for Harrison Ford.

It feels like Murphy’s witty moments were added by him and that’s what gives the movie its personality. The script generally isn’t exactly dazzling but it has its moments and I liked seeing Murphy a little more restrained.

Michael Wincott was the go-to villain of the 90’s and I think Michael Korda is one of his best antagonists purely for how unhinged he is. He is a fantastic actor and I love how when we are first introduced to Korda he is charm personified but then he suddenly transforms into a vicious killer.

The movie has him unravelling as he tries to recover money that is owed to him, but he is constantly foiled by cop Scott Roper (Murphy). Korda ends up in jail but even that can’t hold him, and he gets out (in one of the easiest prison escapes of all time) all leading to an explosive showdown between Korda and Roper.

Michael Rapaport is well cast as Roper’s new partner Kevin who is every bit as smart as Roper and a good ally; I particularly enjoy the scene involving the Coke bottle which was well thought out.

The action highlight is definitely the car chase through San Francisco which is reminiscent of The Rock (which came out a year earlier) but the finale is tense and Korda has an impressive bad guy death guaranteeing no sequels for him.

At an hour and 52 minutes Metro moves at a decent pace and even when things slow down to give us character moments it still keeps us engaged. Roper’s on/off relationship with his lady Veronica ‘Ronnie’ Tate (Carmen Ejogo) is your typical cop movie story but they have good chemistry together so it’s never dull.

The music score is bombastic and exciting really elevating the set-pieces especially during the aforementioned chase scene.

Overall, Metro may not be anything new but Eddie Murphy is more restrained than usual with a few dramatic scenes amongst the chases and explosions. Michael Wincott makes for an effective villain stealing every moment he is on screen and it’s well paced so if you haven’t watched it for a while it might be time for a revisit.