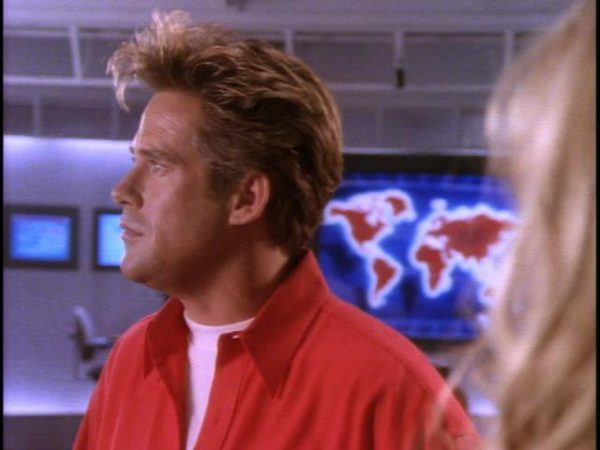 Not to be confused with the Sylvester Stallone movie of the same name; this is the 1993 TV series starring Michael Dudikoff.

The plot is as follows (courtesy of Wikipedia): Robert “Scandal” Jackson, Jr., is an ex-Navy SEAL who went A.W.O.L. after refusing to blow up an enemy command center housing civilians. He disappeared to the wilderness of Alaska, changing his name and appearance, and became a teacher in a small Inuit community. But a part of his past caught up to him and he was shot in the face, his comatose body left for dead. He awoke in the hospital three weeks later and found himself with a new face and a new chance at life, thanks to a woman named Danielle LaPoint.

Danielle offered him a job with “Cobra”, an undercover anti-crime agency that provides justice for victims who haven’t benefited from the system. Scandal is reluctant to leave his Alaskan life behind, but then Danielle’s boss, Dallas Cassel, makes him an offer he can’t refuse: the chance to catch the man who murdered his father five years earlier. From behind the wheel of his classic AC Cobra, Scandal dispenses justice in the fictional Bay City.

First all I have to mention Dudikoff’s epic mullet which he starts off with in this show and I knew from that point on that this was going to be awesome. It also has a great electric guitar theme tune and any time Scandal does anything cool in the show (which is a lot) you get that guitar riff. I also need to tip my hat to his character’s name: Scandal Jackson. Has anyone ever met anyone called Scandal? I haven’t, nor have I ever met anyone called Matrix or Rambo though which continues to disappoint me every day.

The show co-stars Allison Hossack and James Tolkan who run Cobra and throughout the series you have the obligatory will they/won’t they between Dudikoff’s Scandal and Hossack’s Danielle. The three leads work well together and I love seeing Tolkan playing more of a hero rather than the shouty character he was known for in Back to the Future and Top Gun. Speaking of which, keep an ear out in the second episode when a character quotes his iconic line from Top Gun which should make you smile/groan in equal measure.

There is an interesting supporting cast including Sam Jones (Flash Gordon) as one of the main villains but there’s also Richard Lynch, Bo Svenson and an early role for one Vladimir Kulich.

What were we thinking in terms of fashion in the 90’s though? Just look at Tolkan’s ties throughout the show and it was clearly the decade that fashion forgot.

The show didn’t have a massive budget so the action is quite low key but there are a few fight scenes scattered throughout to keep things interesting. It is more of a procedural with Scandal and his team helping out someone new each week. I liked how you could dip in and out of the show as each week is a standalone story so you don’t have to have watched every episode like most modern TV shows.

It’s obviously a little cheesy now but I’m surprised by how well the show still holds up; Dudikoff has easygoing charisma on-screen and he kicks plenty of ass so it delivers the action goods. If you’ve never seen Cobra then try and seek it out; you can get it on Amazon in a DVD box set which is worth picking up.